Mail order catalogs that is.  I remember as a kid receiving the Sears and Robuck catalog and paging slowly through it while circling what I hoped my mother w 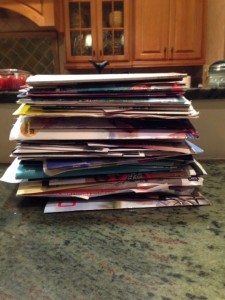 ould order for me.  I very rarely got what I wanted but it was still fun doing it.  As I got older it was more fun to look at the male models.   FYI, the first Sears and Robuck  catalog was mailed in 1894 and it saw its demise in 1983.  Well there now seems to be a resurgence in the catalog business.  This resurgence was reported in an article in the Wall Street Journal on April 17, 2014 (www.WSJ.com).  After reading the article I decided I wanted to satisfy my curiosity by seeing not only how many catalogs I get but also how much junk mail.  I started on April 18, 2014 and ended the accumulation on May 18, 2014.  The stack was 8 1/2 inches high and my counter had put on 22 pounds.  If I had done this experiment during the holidays, the catalogs from Restoration Hardware would have taken up most of that weight.  Maybe the amount I received is skewed because it is political season and some of this stack is political advertisements but they tend to be only one page fliers.  I began to study the contents of the stack.  Of the catalogs I received, 25% were from companies from which I had made a purchase.  The rest, I suppose, were from sister companies or from  other companies that had bought  mailing lists.  For that 25%,  I am prime meat.  When I do get their catalogs, I do take the time to go through them.  I even take them and put them aside until I do have the time.  How often do I purchase something from that specific catalog?  Not that often.  But when I begin to look for something specific, I get online or go into a store and seek one of their products.  That is what retailers are counting on.  The catalog becomes bait.  Ever have the retailer ask you for a catalog number?  They’re tracking the success of that particular catalog as well as what they had advertised.    The retailers can pinpoint  exactly when catalogs hit your mailbox because there is an immediate spike in online and in store sales.  How much does it cost a company to produce a catalog and mail it?  According to the WSJ, “The average catalog costs much less than a dollar to produce, including printing, mailing, the purchase of new addresses  and fees for an outside mailing house or product management.”  Typically each catalog mailed results in about $4 in sales.  That’s why someone like Williams-Sonoma spends 1/2 of their marketing budget on catalog production and mailing.  A good bang for the old buck.  Which reminds me of the Seinfeld episode where Kramer gets so many Pottery Barn catalogs he wants to refuse his mail.  Of course Newman gets in trouble…as always.  I did try an app on my iPhone called Paper Karma.  They say they can rid you of unwanted paper mail and help save the earth!  It didn’t do anything of the sort.  After about a month, here it all came again.  Now where did I put that Napa Style catalog…

Many people looked strangely at me when I said I … END_OF_DOCUMENT_TOKEN_TO_BE_REPLACED

Well, more like sings along while in the last row … END_OF_DOCUMENT_TOKEN_TO_BE_REPLACED