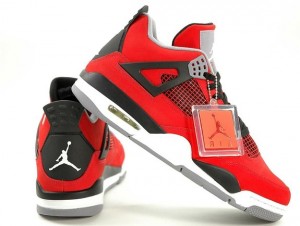 May I call you Michael?  It seems that should be OK since I’m a woman of a certain age and that means older than you.  Before I begin, I’d like to congratulate you on a fabulous wedding, all $10 million dollars worth of it. That must  have been some shindig.  I’m writing to you because of an article I read online from CBS Detroit.  The title:  Some Metro Detroiters Wait in Line Outside for a Week in Every Kind of Weather for Air Jordan’s (June 12, 2014).  You frequently see these kinds of articles when Nike decides to release new Air Jordan’s or retro Air Jordan’s.  You also tend to see more articles entitled like this:  Shoppers fight, arrested over new Air Jordan’s (Dec. 23, 2011), Riots Over New Air Jordan’s (Dec. 24, 2013), Police use pepper spray to control mob at Alabama mall (Dec. 20, 2012) and the list goes on.  I read an article where a reporter asked whether something should be done about this i.e. the mob scenes at your shoe grand openings.  Perhaps selling the shoes online instead.  But Nike seems to believe that they like this attention.  That they can control it through their stores.  Hasn’t worked yet, has it?  I don’t see how you can tolerate this.  Let’s look at a few facts and I’ll limit those facts to Detroit.  The boys mentioned in the Detroit area were there to buy $250 shoes.  Ok, facts:  Detroit’s unemployment rate is one of the highest in the nation, 16.3%.  It has the highest crime rate in the nation, 1052 violent crimes for every 100,000 people (FBI).  Detroit is given close to 2 BILLION, 2 BILLION $ in federal hand outs.  $200 million alone goes to Title One assistance.  The median household income is $25, 193, half of the rest of the US.  They have three times the poverty level of the rest of the US (2011 Census Bureau statistics).  I could go on about how bad things are in Detroit but I think you get the picture.

That’s enough about Detroit.  How about you?  You have achieved the American dream and put whipped cream and a cherry on top.  The net says your total wealth is close to 1 billion $.  You rock!  I’m not being sarcastic.  You fly a 50 million $ plane to your many homes throughout the world.  You give generously to charity.  You make approximately $80-100 million a year on endorsements of which $60 million is from Nike/Jordan brand royalties.  And therein lies my rub with you.  You are wealthy beyond any of these boys dreams.  They will never, ever see the kind of wealth you have accumulated.  Most of them are on minimum wage, high school drop outs, out of work, in gangs, supporting families. By buying Air Jordan’s, I guess they feel they’re getting a small piece of your pie.  But they’re only making your pie bigger, and you really should be ashamed of yourself.  You have pull at Nike.  You’re a philanthropist. So why don’t you be a little more philanthropic and get rid of these shenanigans perpetrated by Nike?  Let the parents that can hardly put food in their children’s mouths spend money on food and NOT on these highly prized Air Jordan’s. Find another way man to put your shoes in their hands without riots and without the exorbitant pricing.

You are a highly respected sportsman and businessman.  I certainly remember the commercials, “I want to be like Mike.”  I want to be like the Mike that does right by his countrymen and make Nike stop these highly dangerous and highly provocative sale’s promotions of your shoes.  And find a better way to add meaning to their lives as opposed to having your sneakers be that “meaning”.

That’s my opinion and I’m sticking to it.

A Woman of a Certain Age

Many people looked strangely at me when I said I … END_OF_DOCUMENT_TOKEN_TO_BE_REPLACED

Well, more like sings along while in the last row … END_OF_DOCUMENT_TOKEN_TO_BE_REPLACED