That is one of the first things you learn when you go on an African safari…DON’T RUN! Apparently, to the wildlife, that makes you look like food. I just finished reading a delightful memoir by Peter Allison entitled, Whatever You Do, Don’t Run! True Tales of a Botswana Safari Guide.

He regales the reader with numerous tales of near death experiences, stupidity (on his part and the customers)as well as showing us his great appreciation for all wildlife and nature. He categorizes nationalities this way: that you need to get “beyond the arrogance of the French, the volume of the Americans, the snobby, reservedness of the English, the drunkenness of the Australians, and the utter lack of humor of the Germans (the ya ya’s)”. It’s a great book for the armchair traveler as well bringing back found memories for those who have been on safari. As Peter regales you with his stories, I will regale you with one of mine.  For those of us who have been lucky enough to go on safari, we know that there are times when you might accidentally come into contact with a lion or hippo (the most dangerous of all animals in Africa) or leopard. When we were in the Okavango Delta in Botswana, we had the pleasure of a lioness visiting us in our camp. Here’s how it went. Most luxury camps have a dining hall separate from the accommodations and next to the dining hall is “bush TV”. Read more…

This is an open fire with chairs around it so that everyone can tell of their best sightings of the day. In this case, there was also a small bubbling fountain. It was past sunset and we had just sat down for dinner. The camp we were visiting was Kwai River Lodge named so because the Kwai River runs just in front of the dining hall. We were having a lovely meal overlooking said river. All throughout the meal we kept hearing lions roar. I can assure you that is a very eerie sound to hear. When we’re finishing up, we see two male lions running on the other side of the river and roaring at the top of their lungs. Have you ever seen The Ghost and the Darkness (1996 with Michael Douglas and  Val Kilmer) about 2 man eating lions 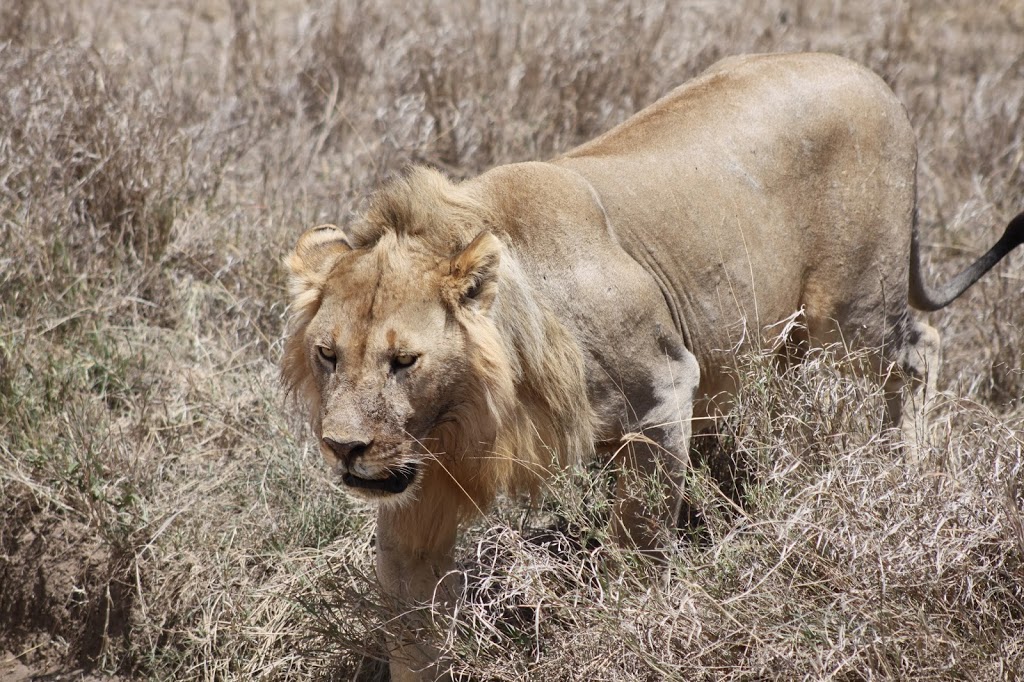 in Tsavo National park in Kenya? Well, this reminded us of that movie. So we had some trepidation after that about walking back to our “tent” (really a canvas sided abode that has a thatched roof, mahogany floors and king sized beds). In Botswana, guides are not allowed to carry guns. A very tall, thin guide escorted us back to our tent. He only had as protection a big stick. He told us on the way that if we saw a lion, “whatever you do, don’t run”! We go back to our tent and because I had not been sleeping well, I took a sleeping pill that knocked me out for 8 hours. We had another couple with us, in another tent, and they also had taken a sleeping pill. So, my husband was the only one who was awake for any period of time. When I woke up the next day, my husband was sitting up and looking at me. He said he had not slept all night. “Did you hear the lions right outside of our tent last night”, he asked? “You’re trying to pull a fast one”, I said. My husband considers himself quite the practical joker. I knew that a lion’s roar in the middle of the night could be heard from a long distance.  (In Peter’s book you learn that a lion’s roar can travel up to four miles)  He said, “No, there was one roaring right by our tent! I even got up and closed the flaps on the windows, turned out the lights, and got the umbrella for defense just in case it came in the room. I also checked to see if the bathroom doors were sturdy enough to withhold a lion attack and then crawled back to bed.” You have to understand that my husband grew up in the mean streets of little Italy during the 50’s. He’s not scared of very much, but a lion, well, that is beyond most people’s defenses. When our friends emerged from their tent, I asked them if they had heard anything. “Not a thing.” Well, I went right up to the camp manager and asked point blank if a lion had come by our tent last next.

He said, “Oh, yes. Right after you went to bed, me and the two Australian guests (I guess the Aussies were drinking!) were at the “bush TV” and we heard a loud roar and turned to see a lioness not 10 feet from us.” “What did you do?” “Well, I told my guests to get up very slowly. Look her in the eye and whatever you do, don’t run!” (In Allison’s book you learn that a roaring lion is not a hunting one). They slowly moved backwards until they reached the dining area and then watched her. She wanted…water. We were there in the dry season and the river was low.  Plus, there was a large herd of male elephants in front of the camp by the river.  The camp is surrounded by a tall wall that will keep out elephants but a lion can crawl right underneath it. And that is what she did. The rest of the pride kept to the other side of the fence…right by our tent. After about 20 minutes of drinking, she gave a loud grunt and sauntered off. But I still had one question to ask the manager. “If the lioness wanted to get in our tent, could she have done so?” “Absolutely. One big slash with her claws and she would have been right in. The thing is she didn’t know what was in the tent. Didn’t smell blood or anything. Therefore, she did what she came to do, drink.” This topic reminds me of a very old joke. Let me modify it. (Peter also tells this joke.) Two friends are being chased by a lion, when one stops to put on his sneakers.

The other guy yells, “You idiot, you can’t outrun a lion.”

Enjoy your trip to Africa!

Many people looked strangely at me when I said I … END_OF_DOCUMENT_TOKEN_TO_BE_REPLACED

Well, more like sings along while in the last row … END_OF_DOCUMENT_TOKEN_TO_BE_REPLACED