If you’ve ever watched the bad boy of cooking, Anthony Bourdain on No Reservations, then you know he’ll eat anything. It’s hard for me to believe he actually likes most of what he eats. I was recently watching the one episode where he eats a goat’s rectum that has been cooked in ashes. Hey, Anthony, do you carry a portable “throne” with you? Now, wow, that was one piece of good ass. We could go off on some good one liners with that. But Anthony, was the offal really not so awful? If you note, oh great foodies, that offal is showing up on many restaurant menus as a way to keep things interesting. For those of you who aren’t in the know, like me, offal is the entrails and internal organs of butchered animals. No Peta and vegetarians allowed with this post! According to Wikepedia, the origin of the word “offal” is probably Germanic , “abfall”, and means “garbage”. Germans really have a way with words, don’t they. Let me just share a little bit of the the bitchy gourmet’s personal history. I was raised on a working ranch in South Texas. When my Dad butchered a calf for our consumption, everything that came from that steer was for our consumption. Sweetbeards, tongue, liver, heart, brains, and tripe. I grew up eating that stuff. So for me, these big city chefs aren’t cooking anything new. But my mother never would have made brined pork belly or cold lamb’s brain on toast. She’d never put that with toast! Anyway, I’ve had the pleasure of eating at Mario Batali’s fine NYC eatery, Babbo, and Mario offers nothing so tempting as goat rectum, but sweetbeards, tongue, and calf’s liver. He has “offered “Testa”, which is a sausage made by boiling the head of a pig, skimming off the bits of brain, gristle, and other effluvia that bubble to the surface, and turning it into salami.”* Thomas Keller of the French Laundry offers an explanation to all of this offal stuff: “It’s easy to cook a filet mignon, or to saute a piece of trout, serve it with browned butter a la meuniere, and call yourself a chef. But that’s not real cooking. That’s heating. Preparing tripe, however, is a transcendental act.”*

Here is a fun list of offals that are offaled around the world. Enjoy them as you travel the great globe:

Scotland: Haggis, sheep stomach stuffed with a boiled mix of liver, heart, lungs, rolled oats and other ingredients (that scares me if they won’t list them) 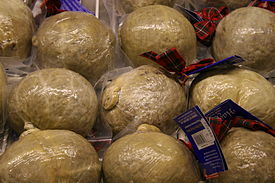 Greece: Kokoretsi, pieces of lamb offal (liver, heart, spleen, kidney, fat) are pierced on a spit and covered by washed intestine wound around in a tube like fashion

Spain: Criadillas, bull testicles, reminds of a very old joke about the guy who goes to a restaurant and sees a parade of waiters bringing in a big tray, placing it in front of a guy, and with a huge flourish, unveils two huge grilled bull testicles. The guy watching wants in on the act. Asks the waiters to put him on the list to possibly eat the testicles of the bull who lost that day in the bull ring. Finally, his big day comes and they unveil the tray with a flourish and there are these two small grilled testicles. What happened, he cries? Oh, senior, sometimes, the bull, he wins. Drum roll please.

I think I’ll have a bowl of cornflakes, thank you very much.

Many people looked strangely at me when I said I … END_OF_DOCUMENT_TOKEN_TO_BE_REPLACED

Well, more like sings along while in the last row … END_OF_DOCUMENT_TOKEN_TO_BE_REPLACED