I am an avid watcher of Anthony Bourdain  on the travel channel (Update…1/27/14…He’s now on CNN). He amazes me by what he eats. He had a wrap up show not too long ago where he asked viewers to send in questions in print or in video form about his culinary adventures. One viewer asked,” what is the one thing you ate that made you really really sick?” If you saw one of his trips to Africa, I think it was Namibia, he goes out with cow herders and they cook, well there’s no other way to describe it, a cow’s ass in ashes. He said he got a bacterial infection of the intestine that left him sick for a long time. 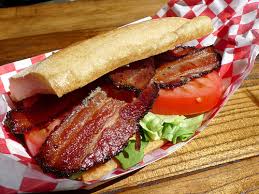 Now, I’m a somewhat adventurous eater. I’ve eaten a 100 year old egg in the “new territories” outside of Hong Kong, drank squid ink in Tokyo, eaten with dismay the Venetian speciality of cuttle fish (leaves your mouth black), and fried grasshoppers in  London. So, when I sit down and look at a menu, I try to look at it with an open mind. My daughter and I decided to treat ourselves to a post shopping lunch at Tom Colicchio’s Craftbar. If you’re a follower of Top Chef then you know of Tom Colicchio. If not, he is one of the top restaurateurs in the US with a minimum of 8 restaurants throughout the country. Plus, he’s the top judge on Top Chef. By watching Top Chef and Bourdain you become very familiar with edibles you normally wouldn’t touch. Now, I grew up on a ranch in south Texas (I probably already mentioned that) and when my dad killed a calf, it was butchered, then different cuts separately wrapped and frozen. We’d eat the whole thing. Except my mom didn’t cook up some beef cheeks or roast up some bones so we could suck out the bone marrow. And that is what you eat at today’s top restaurants. So, me being me, here’s what I ordered: roasted bone marrow with grilled olive oil brushed peasant bread, then pork belly, apple, curry, maple syrup and served with pickled veggies and a beautiful golden beet/red beet pear salad with blue cheese. My daughter played it safer with an arugula, Parmesan, pine nut salad in a lemon vinaigrette, grilled oysters, herb butter, bacon, and spinach and a wonderful Tuscan inspired white beans, prosciutto, and cabbage soup. OK, you might ask, what is bone marrow and as you ask you might add an oh yuck. It is literally a bone that has been roasted with the “marrow” left in side (it is the flexible tissue inside the bone). You put it on bread like butter. It’s served with a teeny tiny spoon to extract the marrow. Bourdain sucks it right out. Would I order it again? No. There wasn’t enough there to get a really good sense of the flavor. What is a “pork belly”, Hairball? It literally is the belly of a pig. It’s the part of the pig, at least here in the US, where we get our bacon. It was fried girls and boys. You have a layer of pork and then a layer of fat, pork, fat, pork, fat. Oh my goodness. I heard my arteries clog. One big fat piece of bacon. Fried. We didn’t stop there, oh gentle readers. We had ‘smores and butterscotch pudding. And, of course, wine was imbibed (only one glass, I was driving). It was a delicious meal but mine was so rich. I’d order the pork belly again if someone would share it with me. The oysters were delicious. The beets I’d eat forever. Everything was incredible. It set me back a few $$$ but was well worth the adventure.

It’s the layer of fat found between the skin of the pig and the meat. Cholesterol check anyone? Oh, and if there’s ever “beef cheeks” on the menu, order them. They are so succulent and moist. On to pig cheeks and fish cheeks and….

Many people looked strangely at me when I said I … END_OF_DOCUMENT_TOKEN_TO_BE_REPLACED

Well, more like sings along while in the last row … END_OF_DOCUMENT_TOKEN_TO_BE_REPLACED