A genre in the writing world that has fallen into the dust bin and sold for 25 cents at garage sales is that of the Western. Once a staple of American writing from the 2 penny booklets sold during the 1800’s to Zane Grey to Louis L’Amour, it seems the genre has disappeared. You have some novels that are sort of set in the west like Cormac McCarthy’s Border trilogy or his No Country for Old Men (all placed in the southwest and Mexico). But if there is a western you should pick up and read, it’s Larry McMurtry’s Lonesome Dove. 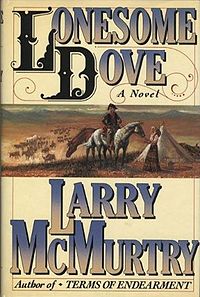 Here’s a wonderful quote from the one and only Stephen King on what you should read: “There are books full of great writing that don’t have very good stories. Read sometimes for the story… don’t be like the book-snobs who won’t do that. Read sometimes for the words–the language. Don’t be like the play-it-safers who won’t do that. But when you find a book that has both a good story and good words, treasure that book.” And that is Lonesome Dove.  Read more… Both a great story and it is beautifully written. Published in 1985, it won the Pulitzer Prize for Literature in 1986 and it is celebrating its 25th anniversary this year.
The opening pages are like many fine novels or fine wines. It takes a while to breathe. Look at the first few lines: “When Augustus came out on the porch the blue pigs were eating a rattlesnake-not a very big one. It had probably just been crawling around looking for shade when it ran into the pigs. They were having a fine tug-of-war with it, and its rattling days were over. The sow had it by the neck, and the shoat by the tail.” And the novel continues in this vein for about 100 pages. Let me set the tale. Lonesome Dove is a small settlement way into West Texas on the Rio Grand River. It is hot. It is dusty. It is lonesome. Life is slow. It takes some getting used to if you do at all. It is populated with the fringe elements. Two old retired Texas Rangers, Captain Woodrow Call, a taciturn, stoic, stubborn, dead set in his ways kind of guy, and Augustus or Gus , a womanizer, hard drinker, philosopher and an old softy, are the primary characters. But they are surrounded by a wonderful and vast cast of characters: Lorena or as Gus calls her “Lorri darlin”, the prostitute with a heart of gold, Deets, their black side kick who has been with them for years, Jake Spoon, a womanizer with a selfish heart, and the evil half breed, Blue Duck. McMurtry starts the book slowly to showcase the setting as well as the dullness of life at Lonesome Dove. Then he creates a catalyst that propels these characters into love, danger, death, betrayal, extreme violence, and rebirth.

The catalyst is a trail ride which is thought up, pushed and fought hard for by Captain Call. This would be the first of its kind from Texas to the Montana territories. Of course Gus thinks Call is crazy but he’s as bored as Call. Their old ranger buddy, Jake (handsome devil that he is), shows up, he usurps Gus in Lorena’s affections, the long trail ride begins and it immediately starts with tragedy. Then Katy bar the door because all hell breaks loose.  Their mission really is pointless and in the scope of things, insignificant. But it showcases the heroics of the human character as well as its frailties, the selfishness as well as the generosity of the human spirit and finally the proverbial evil versus good. And for those who are just looking for a good story, you’ve got all kinds of bad….Indians, Mexicans, horse thieves, buffalo hunters, and even a female town bully. Wild chases, hangings, arrow pierced bodies, and the downright beauty of big sky Montana and the plains of Kansas.

This says it all: “If you read only one western novel in your life, read Lonesome Dove.”—USA Today

Many people looked strangely at me when I said I … END_OF_DOCUMENT_TOKEN_TO_BE_REPLACED

Well, more like sings along while in the last row … END_OF_DOCUMENT_TOKEN_TO_BE_REPLACED