Laura Hillenbrand is the author of the wildly successful Seabiscuit. Some years ago, she was afflicted with a virus which left her with chronic fatigue syndrome. So, all of her research for Seabiscuit was done either doing interviews over the phone or computer research. While doing her research for Seabiscuit, she kept coming across the name of Louie Zamperini. She sees this quote: “the only person who could outrun Seabiscuit was Louis Zamperini”. Intrigued by this quote, she begins to find out who “Louie” is. And does she come across some story.

It begins in Torrence, CA in the 1930’s. Louie is one mess of a boy. Today they’d probably diagnose him as ADD and put him on Ritalin. I digress. The boy is in constant trouble. He plays practical jokes, steals, runs away from home, is truant from school and is, basically, a juvenile delinquent. His older brother, who is the antithesis of Louie, decides that he is going to try and channel Louie’s energy and talks him into getting into sports. Since Louie needs to always run fast from his troubles, he tries out for track. And it turns his life around. Against all odds, as some would say, he tries out and makes the US Olympic team for the 1936 Olympics. He doesn’t live up to his expectations but he does meet Hitler. He is so looking forward to the 1940 Olympics in…Tokyo.  Read more…

As you can tell from the title, things don’t go too well for Louie after that. He is drafted into the Army Air Corp and becomes a bombardier on a B-24. Here is where Hillenbrand has really done her due diligence on the war in the Pacific. We always hear so much about the European theatre, but here, she makes you feel like you could really be there. And “there” is one place you really don’t want to be. She gives some amazing statistics about  how many airmen were downed, not by enemy fire, but simply because of poor plane quality or “lost” because there were no procedures in place to try to find downed airmen in the vast expanse of the Pacific Ocean. Unfortunately for Louie and two other men, they become “lost” at sea for 47 days. Now, if you were a US, English or Australian soldier captured by the Germans and placed in one of their POW camps, your chance of survival was 80%. But, if you were captured by the Japanese, you had a 20% chance of survival. The Japanese didn’t believe in surrender and felt if you did, then any punishment they meted out, you deserved.  Louie was captured by the Japanese. His internment is one of torture, humiliation, starvation, disease, in other words, truly man’s inhumanity to another human being. Louie is sent to an internment camp in Japan. One of the guards finds out that Louie had been in the Olympics and proceeds to make life for Louie pure, unadulterated, hell. The guard’s nick name was “the Bird”. 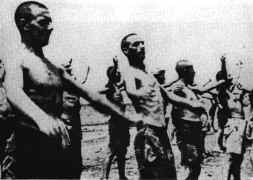 Not because he looked like a bird but if they gave him a name that the guard might find humiliating, he would make them pay.  Really, really, really pay…How Louie survived is just beyond belief. But he did. The story of Louie’s return, his post traumatic stress disorder, his alcoholism is heartbreaking. How can someone who has been through something so horrendous possibly explain or why even try to explain what his life was like at one of those internment camps? Louie does manage to marry and because of his wife, he survives. His wife doesn’t save him though. The young evangelist, Billy Graham, does. His wife drags him to a revival and Louie hears the message of God and Louie is saved.

Later in life Louie tries to find “the Bird” to forgive him. As the reviewer, I will not tell you what happens. Louie is still alive and kicking at the age of 93. His ordeal made me ponder “the will to live”. What is it that in some people it’s, “That’s it. I can’t take anymore.” And then lie down and die. While others, like Louie, go through life kicking and screaming.

Many people looked strangely at me when I said I … END_OF_DOCUMENT_TOKEN_TO_BE_REPLACED

Well, more like sings along while in the last row … END_OF_DOCUMENT_TOKEN_TO_BE_REPLACED