The first printing of Erin Morgenstern’s debut novel was 150,000 copies, virtually unheard of for a first time novel. The rights have been sold in 30 countries and the movie rights have already been sold. Why the hype? The publishers believe they might have the next Harry Potter or Twilight series on their hands. Let’s see if I agree… 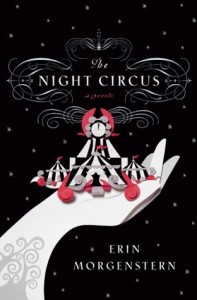 Let me break the novel in to two parts, the plot and characters and the writing itself. What’s the reason for doing so? There is a huge disconnect between the two. Let’s start with the plot and characters. The novel takes place in the late 1800s. Two magicians/illusionists, Mr. A.H., the man in the grey suit and his antagonist, Prospero the Enchanter aka Hector Bowen, have been playing, for many years, a rather insidious game of pitting one of their own “magic” students against the other to see who can “win” a game. But the question throughout is, what kind of game is it? What do they win when the game is complete? But more importantly, what happens if they loose? Read more…
The Night Circus is the brainchild of a theatrical producer named Lefevre who is cajoled into creating The Night Circus, or Cirque des Reves (Circus of Dreams) for the specific use of the two adversaries. The adversaries are Marco an orphan selected by Mr. A.H. and Celia, Prospero’s own daughter. Mr. A.H. locks Marco in a room for long periods of time having him read old texts and studying while Prospero cuts his daughter’s fingertips with a knife to teach her to heal herself. They are both trained in telekinetic and psychic powers. The two, in different ways, become attached to the circus. Celia becomes an illusionist and Marco becomes the assistant to Mr. Lefevre. But they are more than mere assistant and illusionist. They are creating a world within the circus where in they use their unique talents to enchant, mesmerize and seduce their paying customers. What makes The Night Circus so appealing and mysterious is that it just appears. And then at dawn…it’s gone. Others characters involved in the circus are a contortionist, Tsukiko, who holds a very dark secret, Herr Friedrick Thiessen, who creates a magical clock for the circus and is head of the circus fan club and the red haired twins of Poppet and Widget. As far as Marco and Celia, well, as expected they soon find out that they are competitors in this game and, well, fall in love. Do they find the end game? Yes they do and it’s the death of the looser. What to do? That’s the plot. What about characterization? Well, that’s about as much depth as the author gives each character. For some reason Morgenstern decides to add a character “outside” the circus. A boy named Bailey who is looking for some connection to something. And that something becomes the circus and Poppet. Morgenstern manipulates the story to make Bailey an important figure but in some ways rather than enhancing he breaks the story up.

What Morgenstern does so well is make the circus come alive in your imagination. The circus and all its players are dressed or coordinated in black and white. Even the pathways are black and white. Here is what you’ll experience at Cirque des Reves: In one tent, you see Tsukiko fold herself into a glass box, in another tent, you see nothing but ice which has a garden that blossoms flowers of ice, yet in another you can open tiny bottles that are filled with scents that will bring back favorite personal memories. Celia’s illusions aren’t really illusions. She can really turn a piece of cloth into a bird and while performing, her dress changes hues of black, white, and grey. The labyrinth: “You walk down a hall …that leads to a spiral staircase…the stairs go both up and down. You go up, finding a trapdoor in the ceiling. The room it opens to is full of feathers that flutter downward…they fall like snow over the door in the floor, obscuring it from sight. There are six identical doors. You choose one at random…and find yourself in a forest full of evergreen trees…there is the sound of a woman laughing nearby, or perhaps it is only the rustling of the trees as you push your way forward…searching for the next door…you feel the warmth of breath on your neck, but when you turn there is no one there.”

My opinion…Morgenstern spends too much time on the essence of the circus and not enough time on giving her characters “life”. As the reviewer from the NYT’s (Stacey D’Arasmo) said: “One wishes Morgenstern had spent more time on the hauntingly unanswerable question that runs, more or less ignored, through these pages: Can children love who were never loved, only used as intellectual machines? What kind of magic reverses that spell?…”

It may make a beautiful movie but for me, the final word is: I wasn’t enchanted.

Many people looked strangely at me when I said I … END_OF_DOCUMENT_TOKEN_TO_BE_REPLACED

Well, more like sings along while in the last row … END_OF_DOCUMENT_TOKEN_TO_BE_REPLACED