There was a time when Jo Nesbo was called “the next Stieg Larsson”. Not any more. The Norwegian crime writer has sold over 14 million books worldwide as well as having been translated into 40 languages.  Since I began reading Nesbo last year,  I’ve found that his publisher has been playing fast and loose with publishing dates. In Nesbo’s novels featuring the detective Harry Hole, there are 9. But his publisher will publish a new Harry Hole novel in the UK and US before publishing an old one. It makes it very hard to try and keep up with where Harry was the last time you saw him. Now let’s deal with the name, Harry Hole. There are some people in the US who would put this bull’s eye of a name on their kid. I had to find out if this was the name used in the Norwegian language novels. I wrote a review on Amazon UK and asked if someone would respond to my question, “Is his name really Harry Hole or is it Lars something?” I got an answer from a UK reader. He led me to the BBC Worldwide Book Club which had an interview with Nesbo. He was asked to pronounce Harry Hole in Norwegian. Here it is phonetically: Hurree Who-la. Read more…
Nesbo’s writing is complex and ambitious. You need to be alert and wide awake while reading his novels because he likes to drop vague clues and red herrings along the way. It doesn’t help that the place names and characters’ names are Norwegian. I sometimes give them nicknames so I can read right over the name. He then mixes in some Russian, Swedish, and you then have a true smorgasbord. 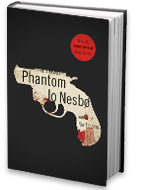 Harry has got to be the most damaged protagonist in crime history. The scenes describing Harry’s bouts with alcoholism are heartbreaking. As one reviewer describes Harry: “Harry is fascinated by evil…he’s a loner, with a hard boiled sensitivity and an intuition that borders on the super-natural…he is a genuine anti-hero; an impossible character yet impossible not to like.” He has a scar that runs from his mouth to his ear and a titanium middle finger. He has a real love in his life, Rakel, but every time he gets close, something always bad happens. Rakel has a son named Oleg, who thinks of Harry as his father. In the previous novel,  The Snowman, Harry was fired from his police job, and then moved to Thailand. Rakel will have nothing to do with him. But now she needs him..  That’s where Phantom begins. Oleg is now 17 and has gotten himself into big trouble, not only with the law but with drugs. He is accused of killing his friend, Gusto, who is a drug dealer and thief. Harry returns to Norway to find out if he can clear Oleg and keep him out of trouble. With Harry there is always trouble. The trouble involves a new drug, “violin”, being sold on the streets by a Russian gangster that no one ever sees, therefore, he is called the Phantom. He has a mob of kids selling the drugs, three of which are Oleg, Gusto and Gusto’s sister, Irene. “Violin” is synthetic heroin. The story is told in the present and then with flashbacks provided by Gusto. The story begins with Gusto lying on the floor of his drug pad after having been shot. One chapter is Gusto explaining the truth and the next is Harry trying to figure out the truth. There are a couple of side stories with corrupt politicians and airline pilot smuggling schemes which do add some details about the Phantom.

Nesbo’s books are full of violence. In this one there is a brick studded with nails and a very unique take on water boarding.  There is always a way in which Harry somehow gets his body damaged. This time he sews up his cut throat with a needle and black thread. And being as claustrophobic as I am, I was squirming as Harry got himself into quite a “close” situation.

I thought I knew who killed Gusto and I thought I knew the answers to the questions. Nope. Just as you think the story is wrapped up, here comes another set of circumstances to again drive you crazy. I was yelling, no! no! no! it can’t be!

Bottom line: If you like really complex crime novels that have relentless momentum, then read Phantom. Or go online and get a list in order of publication.  It’s not necessary to read them in order but The Snowman, Phantom and the latest, Police, do intertwine.

Many people looked strangely at me when I said I … END_OF_DOCUMENT_TOKEN_TO_BE_REPLACED

Well, more like sings along while in the last row … END_OF_DOCUMENT_TOKEN_TO_BE_REPLACED