I was at my allergist’s office waiting for the time to pass after I had gotten my allergy shots. Since I was getting ready to go on vacation and looking for something to download for the long flights, I noticed another patient reading her e-book. I asked her what she was reading and she blushed. She said, “You’re going to think I’m silly but I’m reading the Fifty Shades Trilogy.” Now I had heard of the Trilogy and knew it had something to do with bondage. OK, a little light reading for the trip. I downloaded the first book and finished it within 2 days and then realized that I hadn’t downloaded the other two! Where can I find a Wi-Fi to connect to?!!! AHHHHH! Many of my friends have read the books and mostly it’s, “oh my.” And that will normally be accompanied by a huge blush.

So here’s the deal. E.L. James, a British mother of two read the Twilight series and saw the movies. She basically said “wow”. I want to do something like that but for adults. She began writing the book and publishing it on fan-published erotica sites. It became such an online phenomena that an Australian publisher won a bidding war to get them published and now Universal pictures has picked up the rights for $5 million and E.L. has script and casting approval. That’s something Stephanie Meyer didn’t even have. There is one book sold every second. Why have these books started such a craze? Well, in the US the books are being called “mom porn.” I guess that means that there are a lot of lusty housewives out there looking for something “different”. The basic premise is this: 21 year old, gawky, technophobic, Anastasia Steele meets 27 year old uber rich, extremely handsome, standoffish, domineering Christian Grey. We are repeatedly told about his stunning grey eyes, his stunning physique and his wavy thick hair. Oh my. But little is actually said about Ana’s looks except that she has long brown hair, she’s pale and has blue eyes too big for her face. So what does Christian see in Ana that enthralls him? You see he’s into BDSM, bondage, dominance, sadism and masochism. Christian has a bleak and dark past and when he was 15 he was seduced by an older lady who brought him into the BDSM world. He has no clue about having “vanilla” sex. He sees Ana as a submissive and wants her to become part of his world. Now, when E.L. was asked on 20/20 about is it appropriate to portray a young woman as a submissive she replied,” Well, women take control all day…they go to work, they care for the kids, they cook, they clean…it’s nice to every once in awhile give control over to someone else.” Many reviews have been written criticizing the novels on this level. The only thing I could say is that James could have made Grey and Anastasia older. Anastasia being 21 AND a virgin keep niggling at the back of my brain. She’s not a virgin for long…But other reviews have said that the book has great overtones about learning to compromise, that when it comes to sexuality there needs to be an openness between partners as to what is, as Christian would say, a “soft limit and a hard limit.” On a basic level (really basic) it’s about the evolving dynamics of two people falling (possibly) in love.

The writing is really, really bad. James admits this. She repeats herself time after time: Oh my, kinky f***kery, holy cr*p, Ana constantly biting her lower lip, her inner goddess is always doing back flips and his flashing grey eyes. It seems she gets erotically charged every time Christian comes around (OK, that’s loaded with some double entendres). And how many times can he grab a fist full of her hair and pull her head back?

So why then read the books? It’s purely guilty pleasures. A woman’s sexuality is awakened by a very experienced man (who has a Red Room of Pain). You get to follow their sexual exploits (with kinky f**kery) as well as their developing relationship. Plus there are some side stories of some interest. But the story is all Ana and Christian’s.

Buy or download Fifty Shades of Grey and see if it’s for you. It’s definitely not hard core but even if a little BDSM is too much for you, don’t waste your money. Fifty Shades of Grey introduces you to Ana and Christian and their push and pull (OK stop with that) relationship. Fifty Shades Darker leads you to why Christian is the way he is and his learning to compromise and Fifty Shades Freed gives you the climax (stop that!) to the story. James wraps the last book up nicely by ending with Christian (in real time) experiencing  his first meeting with Ana. That is where you learn what she really looks like and why he becomes entranced by her.   (Jamie Dornan will play Christian and Dakota Johnson, Ana.) 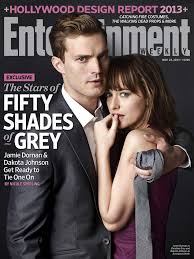 Final take: I thoroughly enjoyed all three books. If the movie studios follow the books, the movies will have to be NC 17. And the big question is…who will play Christian and who will play Ana? James wants unknowns and I tend to agree with her. And if you’re really into the novels, try this link to Goodreads where readers wrote in with their favorite quotes:  https://www.goodreads.com/work/quotes/15732562-fifty-shades-of-grey .

Many people looked strangely at me when I said I … END_OF_DOCUMENT_TOKEN_TO_BE_REPLACED

Well, more like sings along while in the last row … END_OF_DOCUMENT_TOKEN_TO_BE_REPLACED