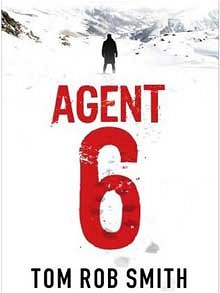 For those of the baby boom age, remember when we did drills in case of a nuclear bomb, we covered our heads and got under our desks?  Remember how real and potentially catastrophic the Cuban missile crisis was?  Do they still teach the cold war in school today?  Do the kids even know about Stalin?  I’m a wannabe history teacher…anyway…

I thought that since the hunkster, ex KGB punkster, Vladimir Putin, was once again in charge of mother Russia, I’d review the three secret police thrillers by Smith. I’m going to digress here to make a point. I recently finished a nonfiction book about the only North Korean prisoner to ever escape from a North Korean internment camp. He had been born there. So for him lying, tattling, turning on family, lack of love, lack of attachment was a way of life. There was no moral compass. For the people of Russia, they have lived this type of life since almost the beginning of their history. First the Tsars, then Lenin, Stalin, and the multitude of following leaders who kept the Russian people all under their thumbs and afraid to move or speak in fear of being turned in to the secret police, whether there was guilt or not. The Russian leaders looked at the state they created as a utopia, a workers’ paradise where only political crimes occurred.

Leo Stepanovich Demidov is a hero of the great patriotic war against Hitler. It’s now 1953 and he’s a MGB (KGB precursor) officer knowing that to stay safe he must be relentless in his job and never, ever question authority. While routinely investigating the death of a young boy, he is asked by the boy’s father to look further because he knows, he just knows, that the death is a murder. If Leo decides to do this, he could be thrown into a situation that could cost him his life as well as the lives of his wife and adopted daughters. Through further, surreptitious fact gathering, Leo begins to believe there is a real murder spree going on. When he brings this possibility up to his superiors, it’s NYET! Not in Soviet society! All is peace and calm and violent crime is only manifested in a capitalist society! Leo must follow his wife because she may be an enemy of the state (does he really trust her? Does she trust him?). Is he an enemy of the state by pursuing this case or is he (by the Soviets) considered a true hero because he tortures those he is told to torture without asking any questions? It’s a stifling and suffocating environment Smith creates with enough Stalin era violence and paranoia to abound. The book is based on the Rostov Ripper case. It’s the best of the three and really good enough to make you want to read The Secret Speech.

We are now going to get more up close and personal with Leo and his wife, Raisa, and their two adopted daughters, Zoya and Elena (their parents had been killed by Leo’s forces). The Secret Speech is set in 1956 and Leo now has a squad of homicide detectives helping him with cases. Supposedly Khrushchev gives a speech, behind closed doors, that decries Stalin era tactics and the Soviet Union will be more of a benevolent society. NYET! Say the old timers. But those that were tortured, exiled, and the families of those that were killed will not let the “old timers” get away with it. Mix that in with the criminal element and you’ve got a big pot of borsht. The catalyst to the story is that a member of this group remembers Leo and what he had done to someone they knew and loved. Reprisals begin getting Leo’s family sucked into the maelstrom. The plot leads you from a gulag and its atrocities to the streets of a budding revolution in Budapest. The real question that arises during this novel, as well as with the questions asked at the Nuremberg trials, is can or should people be given a second chance? As the reviewer for the NY Times asked, “Is redemption possible for men like Leo? And, if so, should it be?” Denise Lehane in his review asks, “what is an ordinary man to do when his very existence makes him an apparatchik of institutionalized sadism?’

The last in the trilogy was published in January, 2012, Agent 6. This is by far the most ambitious of the three. Amazon.com picked it as one of the best books for January. The book begins with a flashback of how Leo was in the beginning, how he met Raisa and how she used him, by marrying him, to keep her self safe. But now it’s the Cold War and Raisa and Leo finally realize they’re in love. Raisa has proven herself to the state as a great teacher and has moved up in the ranks. So much so she and her daughters are allowed to take a trip to the United Nations. Leo warns her not to go. His old MGB thinking takes holds and he begs her not to go. What can go wrong? And with that we get a novel that spans three decades. It’s mostly a story of a tormented Leo, a man without focus, a man dogged by what happened in NYC and by his history. But it’s the Soviet Union after all and he is disgraced, therefore, he is not allowed to go to NYC to find out what happened. With this novel, I did get a little bogged down with the Russian occupation of Afghanistan. It does reveal, however, how easy it is for an occupying force to get bogged down. I think Smith was having so much fun writing about this that he forgot about the story. But eventually we get back to Leo and Raisa and Zoya and Elena. The ending will totally wring your heart. It is haunting…

Final word: DA! To all three…

Many people looked strangely at me when I said I … END_OF_DOCUMENT_TOKEN_TO_BE_REPLACED

Well, more like sings along while in the last row … END_OF_DOCUMENT_TOKEN_TO_BE_REPLACED