Occasionally I’ll pick up the magazine Mental Floss (at six bucks an issue it had better be interesting).  I’ll have to admit that a great deal of it goes beyond satisfying my curiosity.  But if you want some trivia for the Mensa group, it might be for you.  In their Sept. edition they had a feature article on time.  And part of that feature was the importance of doing things at the right time of day.  For example, it’s 6pm EST where I am and I should have just finished exercising because?  Find out why with “Want to make your days happier, healthier, and more lucrative?”  Well then, “just follow this schedule” (I’ve added some personal commentary):  Read more…

7am:  Make a baby!  Yeee hiiii!  Your best bet to make a baby is when you wake up.  It seems that  a man’s sperm count is way up there in the early morning.  (I still remember Woody Allen dressed as a sperm in Everything You’ve Wanted to Know About Sex.) Now this doesn’t work if you have the 1am to 9am shift. 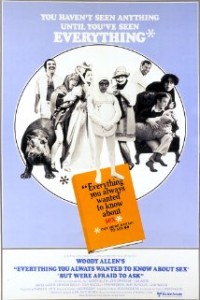 8:30am: Decide something .  Researchers have found that you make better decisions right after you wake up.  Later in the day you get decision “fatigued” and you may make too quick a decision or are more likely to chose an easier decision.

9:30am: UPDATE YOUR BLOG!  Most web surfers check their favorite sites before 10am.  If you want to maximize your web traffic, post right after breakfast. Or, in my case, right before midnight…

10am: No surprise here for us baby boomers.  Take an Aspirin.  Mornings, specifically Monday mornings,  are the most common time for both heart attacks and migraines.  A preemptive aspirin may save you from pain and possibly death.

11am: Send an email.  Analysis (by whom I don’t know) of more than 200 million emails found that people are most likely to check their emails before their lunch break.  Send one at 11am if you want to be at the top of the list.

1pm: Watch a funny video on YouTube.  Researchers from Harvard and Northwestern studied 300 million tweets (how would you like to have that job? Well, it IS a job.) over three years and concluded that the national mood is at its lowest at 1pm.  Want to see a man chased by a sex crazed moose?

2pm: Take a power nap.  YES!  The post lunch slump isn’t just the symptoms of a full tummy.  At around 2pm your body temp drops the same way it does at night.  Australian researchers (gotta luv those Aussies) found that a 10 minute power nap is just the right pick me up.

4pm:  Tweet something witty.  Really?  Wonder what the boss would say.  Ok, tweet.  But why?  A study conducted by social media scientist (did you know there was such a thing?) Dan Zarrella found that Twitter users are most likely to retweet others’ pithy comments between 3pm and midnight, peaking around 4-5pm. #@buggieboo its a pithy that I dont have anything pithy to say

4:30pm:  Clean the house. Wait. CLEAN THE HOUSE?!  Apparently your hand eye coordination is the highest around 4-5pm.  Why not play golf?

5pm:  Exercise.  Here I thought mornings were  better to burn calories.  Nope.  Your body temp is the highest between 5-6pm.  The heat increases stamina and strength while decreasing your reaction time, so the added warmth makes your workout more effective.

9pm:  Sell something on eBay.  According to eBay experts (again with the experts), the best time to end an auction is 9pm EST.  If you’re a bargain hunter, look for auctions that end around 4am.  Then you can just stay up and have sex with your partner and really take a 20 minute power nap at work.  The boss won’t know because they’re tweeting.

10pm:  Solve the world’s problems.  I’m exhausted and so are you.  But guess what? Studies show people do their best creative and abstract thinking when they are tired.  When you’re worn out, go back over that problem you had earlier in the day.  It might just be the time to come up with a very creative solution.

So there you have your schedule for the day.  You OC’s out there are gonna have some fun…

Many people looked strangely at me when I said I … END_OF_DOCUMENT_TOKEN_TO_BE_REPLACED

Well, more like sings along while in the last row … END_OF_DOCUMENT_TOKEN_TO_BE_REPLACED