Tricky Dicky?  Well, for those of you who are too young to remember, Tricky Dicky was one of the nicknames for President Richard Milhouse Nixon. My other choice was Hubert Humphrey.  When you ask people about their “first” time, normally they say it was horrible, not worth it, should have waited, what’s all the fuss about.  With my choices of Nixon and Humphrey, for the “first” time, I would have had to use some of those adjectives   I suppose that if I were to compare myself with Lena Dunham, the young woman behind the ad recently approved by the Obama campaign, I’d have to say I lost “it” to Tricky Dicky.  Sexual innuendos and voting.  “O” my.  What next?  Fifty Shades of voting? I could really go somewhere with this 50 Shades analogy but I have some sense and sensibility and won’t go there.  This is how outrageous this campaign has become.  The last few weeks have been taken up with arguments over Big Bird, binders and now the “lost” virginity. So I guess we shouldn’t be thinking about the the unemployment rate, the high number of people on disability, the number of people on food stamps, the number of unemployed women, our debt to the Chinese,and we certainly shouldn’t be concerned with the resurgence of Al Qaeda and the death of a US ambassador and 3 other Americans.  Nope.  Big Bird come here.   If you haven’t seen the “virginity” ad, here’s the dialog. (By the way, the Lilly Ledbetter act was signed by Obama in 2009.  It’s an equal pay bill.)  Read more…


“Your first time shouldn’t be with just anybody. You want to do it with a great guy. It should be with a guy with beautiful … somebody who really cares about and understands women.A guy who cares about whether you get health insurance, and specifically whether you get birth control. The consequences are huge. You want to do it with a guy who brought the troops out of Iraq. You don’t want a guy who says, “Oh hey, I’m at the library studying,” when he’s really out not signing the Lilly Ledbetter Act.Or who thinks that gay people should never have beautiful, complicated weddings of the kind we see on Bravo or TLC all the time. It’s a fun game to say, “Who are you voting for?” and they say “I don’t want to tell you,” and you say, “No, who are you voting for,” and they go, “Guess!”Think about how you want to spend those four years. In college age time, that’s 150 years. Also, it’s super uncool to be out and about and someone says, “Did you vote,” and “No, I didn’t vote, I wasn’t ready.” My first time voting was amazing. It was this line in the sand. Before I was a girl. Now I was a woman. I went to the polling station and pulled back the curtain. I voted for Barack Obama.”

Now this is Dr. Strangelove stuff. Two ad executives (pro Obama guys) have put this ad together and it’s called The Future Children Project ad.  The video has a group of kids singing this:


Imagine an America
Where strip mines are fun and free
Where gays can be fixed
And sick people just die
And oil fills the sea
We don’t have to pay for freeways!
Our schools are good enough
Give us endless wars
On foreign shores
And lots of Chinese stuff
We’re the children of the future
American through and through
But something happened to our country
And we’re kinda blaming you
We haven’t killed all the polar bears
But it’s not for lack of trying
Big Bird is sacked
The Earth is cracked
And the atmosphere is frying
Congress went home early 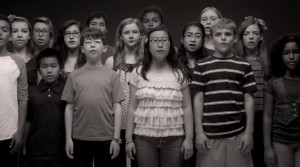 
Have I stepped into the rabbit hole?

Many people looked strangely at me when I said I … END_OF_DOCUMENT_TOKEN_TO_BE_REPLACED

Well, more like sings along while in the last row … END_OF_DOCUMENT_TOKEN_TO_BE_REPLACED