I have been a vodka aficionado for a while.  I’ve tasted quite a few through out my travels especially while in Russia.  But, I’ve come across a USA distilled vodka that I love.  It’s Tito’s Vodka made in Austin, Texas.  I was telling a friend of mine about Tito’s and we decided to do our own little tasting of vodkas.  We had Tito’s, Ketel One, Grey Goose and Crystal Head vodka (the one made by Dan Aykroyd).  Tito’s won hands down.  Not only is it smooth in taste but the price is smooth. Crystal Head is anywhere from $45.00-$50 for 750ml .  Ketel One and Grey Goose $38-40.00 for 750ml.  Tito’s is around $28-30!  The magazine, Wine Enthusiast, out of 100 points gave Tito’s 95 points, Ketel One 89 and Grey Goose 84.  If you doubt my love of vodka, just read my blog about my adventure of trying to get some vodka on Borneo:  http://satisfyingmycuriousity.blogspot.com/2010/05/its-been-while-since-i-last-posted-but.html.Read more…


Here’s the story on Ttio’s: 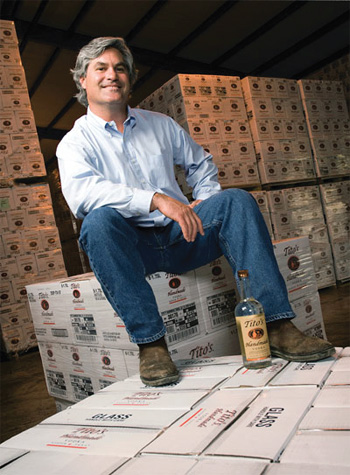 Hi. I’m Tito Beveridge and I’m the founder and owner of Titos Handmade Vodka. I’m from San Antonio, Texas. I went to Vanderbilt for a year then to UT, University of Texas at Austin. I graduated with degrees in geology and geophysics. I got into the oil and gas business and did that in Texas and then down in Venezuela and Colombia and ran heli-portable dynamite seismic crews down there and came back and started a drilling company in Houston, got tired of chasing the buck and decided to move back to Austin, Tx.
I did ground water geology here and got in the mortgage business and it was when I was in the mortgage business that I started making flavored vodka for my friends for Christmas presents. That was in about i guess ’92, ’93. I was at a party one time and a stranger came up to me and said ‘Hey you’re the vodka guy’ and I was like no, contraire, I am the mortgage guy. And that’s when I kinda started thinking that this guy’s telling me i need to go sell my flavored vodkas and this was the first time I really started thinking seriously about it.
So when rates went up a couple points in the mortgage business I started going to liquor stores and ask guys if they’d buy my flavored vodkas, they said “no, go look at all the dust on the shoulders of those bottles there”. Then they said but if I could make it where it was smooth where you could drink straight then I might have something. So I asked them how you do that and they said “Well I don’t know, you’re the guy who wants to get in the vodka business.”
At that point I went and started trying to learn about how to distill and you know it was pre-internet and so there really wasn’t any information about how to make it. It was almost like there had been a book burning at the library. I got a bunch of pictures of old moonshiners and looked at a bunch of those photos and then kinda from looking at all those photos kinda just built a still that kinda looked like those stills. And then just kinda started cooking in that and just trial and error’d. I just kept messing with it until I got to where everybody liked my vodka better than the other stuff you could buy at the time. I basically just kinda kept working at it and working at it.
We bought every vodka that was on the shelf, we put them in little kerr jars and tasted all and came up with the two best ones. When mine beat the other two best ones then I figured that I had my formula right. My friends were all kinda my guinea pigs.
I tried to get some financing a couple of times and it didn’t work out because they said i’d never get my permits, there’d never been a legal distillery in Texas and they said I’d never get a distributor. So I ended up just taking the money I’d saved up while working overseas and I racked up 19 credit cards to the tune of about $88,000. I built a one man distillery and built a production still and just kinda got myself into business. I’d go out and make it and sell it and come back and make some more and you know I was sleeping next to the still and you know just kind of boot-strapped it up.
And then at one point we’d gotten a phone call to come to the World Spirits Competition and I was fixing a boiler so I just sent a couple bottles there and we ended up getting the double gold medal, the unanimous judges choice. And that was up against 72 vodkas around the world including flavored vodkas. That kind of you know, helped spur things along.
I appreciate ya’ll supporting Tito’s Handmade Vodka. It’s really been a dream come true for me and it’s really due to all the word of mouth that we’ve gotten. It’s all pretty much just been from people going into liquor stores and bars and asking for it. So if you are in a bar and they don’t have it, ask to speak to the bar manager. Our distributors are on our website at Titosvodka.com. If you tell 20 of your closest friends we’ll just keep this thing rolling. Thanks a whole bunch, I try to make it good. You know my theory is you make the best vodka in the world and charge a reasonable price, so I’ll keep doing my part of it and I sure appreciate you doing yours. Thank you very much.
-Tito

Many people looked strangely at me when I said I … END_OF_DOCUMENT_TOKEN_TO_BE_REPLACED

Well, more like sings along while in the last row … END_OF_DOCUMENT_TOKEN_TO_BE_REPLACED