I’m sure there are probably more than 9 things that I don’t know about curse words or swearing.  At my age the curse words I normally hear are either aimed at a politician on the TV or following a particularly bad shot on the golf course.  Speaking of swearing and golf, Tiger Woods is frequently fined by the PGA for swearing on TV (at least that’s what John Daly says in his autobiography). No segue, just a different fork:   I remember many years ago going to see Richard Prior in concert.  You, mama, now that had some curse words in it.  He was raised in a brothel.  So most of the stories he told  about his life experiences were viewed through the prism of his upbringing.  So one would not expect him to stand up there and be Jerry Seinfeld.  The only “close to” curse word I’ve heard him say is “damn”.  There are actually college courses built around the psychology of swearing and I even took a course on the psychology behind dirty jokes.  The textbook: The Encyclopedia of Dirty Jokes.  Or something along those lines.  Melissa Mohr, a medieval literature expert (we need more of those), has written a book entitled “Holy Sh*t: A Brief History of Swearing.  She was asked by Time.com to come up with a number of things people wouldn’t know about swear words.  So be ready to razzle dazzle with sparkling repartee at your next cocktail party with your intimate knowledge about swearing:  Read more… 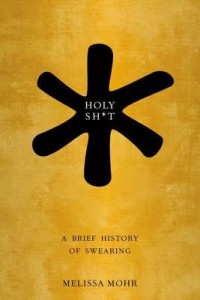 1. The average person swears quite a bit.
About 0.7% of the words a person uses in the course of a day are swear words, which may not sound significant except that as Mohr notes, we use first-person plural pronouns — words like we, our and ourselves — at about the same rate. The typical range, Mohr says, goes from zero to about 3%. What would it be like to have a conversation with a three-percenter? “That would be like Eddie Murphy,” Mohr says. Presumably from Eddie Murphy Raw, not from Shrek Forever After.
2. Kids often learn a four-letter word before they learn the alphabet.
Mohr’s work incorporates research by Timothy Jay, a psychology professor at the Massachusetts College of Liberal Arts, who uncovered the 0.7% statistic above and has also charted a rise in the use of swear words by children — even toddlers. By the age of two, Mohr says, most children know at least one swear word; it really “kicks off” around the ages of three or four.
3. Some of today’s most popular swear words have been around for more than a thousand years.
“S— is an extremely old word that’s found in Anglo-Saxon texts,” Mohr says. What English-speakers now call asses and farts can also be traced back to the Anglo-Saxons, she adds, though in those times the terms wouldn’t have been considered as impolite as they are today.
4. The ancient Romans laid the groundwork for modern day f-bombs.
There are two main kinds of swear words, says Mohr: oaths—like taking the Lord’s name in vain—and obscene words, like sexual and racial slurs. The Romans gave us a model for the obscene words, she says, because their swearing was similarly based on sexual taboos, though with a different spin. “The Romans didn’t divide people up [by being heterosexual and homosexual],” she says. “They divided people into active and passive. So what was important was to be the active partner.” Hence, sexual slurs were more along the lines words like pathicus, a rather graphic term which basically means receiver.
(MORE: Children Who Hear Swears on TV Are More Aggressive, Says Study)
5. In the Medieval era, oaths were believed to physically injure Jesus Christ.
In the Middle Ages, Mohr says, certain vain oaths were believed to actually tear apart the ascended body of Christ, as he sat next to his Father in heaven. Phrases that incorporated body parts, like swearing “by God’s bones” or “by God’s nails,” were looked upon as a kind of opposite to the Catholic eucharist—the ceremony in which a priest is said to conjure Christ’s physical body in a wafer and his blood in wine.
6. However, obscene words were no big deal.
“The sexual and excremental words were not charged, basically because people in the Middle Ages had much less privacy than we do,” Mohr explains, “so they had a much less advanced sense of shame.” Multiple people slept in the same beds or used privies at the same time, so people observed each other in the throes of their, er, natural functions much more frequently — which made the mention of them less scandalous.
7. People in the “rising middle class” use less profanity.
“Bourgeois people” typically swear the least, Mohr says. “This goes back to the Victorian era idea that you get control over your language and your deportment, which indicates that you are a proper, good person and this is a sign of your morality and awareness of social rules,” she explains. The upper classes, she says, have been shown to swear more, however: while “social strivers” mind their tongues, aristocrats have a secure position in society, so they can say whatever they want — and may even make a show of doing so.
8. Swearing can physiologically affect your body.
Hearing and saying swear words changes our skin conductance response, making our palms sweat. One study, Mohr notes, also found that swearing helps alleviate pain, that if you put your hand in a bucket of cold water, you can keep it in there longer if you say s— rather than shoot. Which is a good piece of info to have next time you’re doing a polar bear plunge.
9. People don’t use cuss words just because they have lazy minds.
Mohr discusses the myriad social purposes swearing can serve, some nasty and some nice. “They definitely are the best words that you can use to insult people, because they are much better than other words at getting at people’s emotions,” she says. Swear words are also the best words to use if you hit your finger with a hammer, because they are cathartic, helping people deal with emotion as well as pain. And studies have shown that they help people bond — like blue-collar workers who use taboo terms to build in-group solidarity against management types. When asked if the world would be better off if everyone quit their cussing, Mohr answers with a four-letter word of her own: “Nope.”

Many people looked strangely at me when I said I … END_OF_DOCUMENT_TOKEN_TO_BE_REPLACED

Well, more like sings along while in the last row … END_OF_DOCUMENT_TOKEN_TO_BE_REPLACED