I loved both The Kite Runner and A Thousand Splendid Suns.  In both of these novels, emotions come charging at you and continue like a thread throughout the narrative.  Sometimes it hits you on top of the head.  Whack!  And the Mountains Echoed starts out this way. But the rest of the novel creeps into the crevices of your mind and ensnares you. Here’s how it begins:   A poor Afghan farmer tells his two children, Abdullah and Pari, a story of an evil monster that forces a family to give up one of their children or the monster will kill them all.  The family decides to make it a random choice and the one selected is their favorite.  The father is beyond grief for his son believing, surely, that the monster has eaten his son.  The father makes a pilgrimage to the castle of the monster only to find the son alive and well and thriving.  He decides to leave the son rather than to bring him back to intense poverty.  As the poor Afghan farmer tells this tale to his children, he says, “A finger had to be cut to save the hand.” Read more…
I’ve read a few reviews on the book and I have yet to come across the meaning of the title.  Hosseini said he got it from a William Blake line, “And all the hills echoed.”  He changed “hills” to mountains to represent  Afghanistan’s imposing terrain.  I look at it this way.  When one person who is in the mountains yells, it echoes from mountain top to mountain top.  This is the way this novel is arranged.  With the one act of the poor farmer to cut off the finger to save the hand, the farmer sets into motion a series of events that will bounce from one character to the next . Hosseini says, “I followed the ripples from that first story, and that became like the trunk of the tree and then all of the other branches sprouted from that.” There are 8 different story lines. Some may find the narrative confusing because of this (a different narrator for each chapter).  Hosseini moves from one chapter to another using different points of view and a different style.  Plus, with all of the Afghan names, it can be a little trouble trying to keep everybody straight.

Abdullah, although he only appears in the beginning and the end. Wraps up the novel’s narrative and it will bring tears to your eyes.

Pari: Abdullah’s sister.  She is the catalyst for the narrative.  She also helps bring things full circle.

Dr. Varvaris: A plastic surgeon who moves to Kabul to do reconstructive surgery on children.  He eventually lives in Mr. Wahdati’s house and learns the secret about Pari and Abdullah.

There are a number of other interesting characters that help Mr. Hosseini round out his theme, ” Life just doesn’t care about our aspirations, or sadness.  It’s often random, and it’s often stupid and it’s often completely unexpected and the closures and the epiphanies and revelations we end up receiving from life, begrudgingly, rarely turn out to be the ones we thought (we’d have).” The Washington Post reviewer said this of the novel, “Over and over again, he takes complicated characters and roasts them slowly, forcing us to revise our judgments about them and to recognize the good in the bad and vice versa.”  We may see Nila in chapter two being greedy and selfish.  Then in another chapter we see her as a tragic poet and a devoted mother.  Then in another chapter, we see her as an alcoholic narcissist. Two characters that I thoroughly enjoyed because I felt I began to know them were Dr. Varvaris’ mother, Odie, and his lifelong friend, Thalia. Neither has anything to do with Pari or Abdullah but they really exemplify Hosseini’s theme. 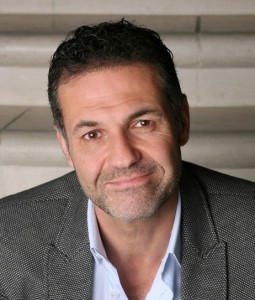 The writing is terrific.  This one hit home since I’m a woman of a certain age: Pari sees herself in a shop window, “She catches herself off guard, vulnerable to reality undistorted by self-delusion.  She sees a middle aged woman in a drab floppy blouse and a beach skirt that doesn’t quite conceal enough of the saggy folds of skin over her kneecaps.  The sun picks out her gray hair…she has a face now that a passerby’s gaze will engage and then bounce from, as it would a street sign or a mailbox number…” Or, Nila doing an interview for a Paris magazine: ” I felt lost. I’ve read…that if an avalanche buries you and you’re lying there underneath all that snow, you can’t tell which way is up or down.  You want to dig yourself out but pick the wrong way, and you dig yourself to your own demise.  That was how I felt, disoriented, suspended in confusion, stripped of my compass.” There are many many beautifully written passages like these in And the Mountains Echoed.

I’m sorry I can’t give you a better idea of the plot.  I’ll let  the reviewer from the Washington Post sum it up, “It’s hard to do justice to a novel this rich in a short review- about the rhyming pairs of characters, the echoing situations, the varied takes on honesty, loneliness, beauty and poverty, the transformation of emotions into physical ailments.”  I would also add loss and abandonment.  This is going straight up the best seller list…

Many people looked strangely at me when I said I … END_OF_DOCUMENT_TOKEN_TO_BE_REPLACED

Well, more like sings along while in the last row … END_OF_DOCUMENT_TOKEN_TO_BE_REPLACED