I wonder if Bruno has any inkling about how much Spanx is in his audience each performance. Now keep this in mind.  Not only women with sagging body parts wear Spanx but so do many of the young women today.  I read an article in my favorite newspaper, The Wall Street Journal, that Spanx actually is causing consternation within the pick up world.  Girl looks great in skin tight dress or skinny jeans, hot guy at bar wants to take her home.  Oops, sorry got to go to the little girl’s room…to remove my Spanx!  And those little imperfections just pop out.  What’s a girl to do?

But I digress.  I was writing about Bruno Mars.  My sister and I love concerts but actually haven’t been to one, at least at a huge arena, in a long time.  Our first big concert together was to see Prince, yes, Prince, in his 1999 and Little Red Corvette days.  Sheila E had the percussion gig. My husband, to this day, can not fathom that my sister and I believe that was the sexiest concert we had ever seen.  He says, “that little twerp”?  Oh yes baby.  That little twerp.  You don’t have to be 6 foot 6 to be sexy dear.  So off we go to see another little twerp, well, he’s 5′ 7″, sorry Bruno (one reviewer called him diminutive). Read more… All of the concerts I’ve attended at this venue were in concert, pardon the pun, with a corporate suite.  We had special parking passes etc etc.  Another free Chardonnay?  Why yes, thank you Jeeves.  But that era of my life is long gone and I had to prepare myself like the ordinary person and buy the tickets online, drive to the venue, and drive back.  I’m going to rant here.   I went online at 12:01 a.m.  12:01!  The only seats I could get were with a limited view.  Are you kidding me?!    At 12:01?!  What a frigging deal these big ticket buyers have and then if you want those center  stage tickets, they’re $350.  I took the limited view for $90 a ticket.  Then I began to think about driving into down town and all of the traffic.  Bruno’s concerts are one of the few acts out there this year that is actually packing the house so I knew traffic would be bad.  I live 40 minutes outside of the city.  On to hotels.com to find a hotel within walking range.  Low and behold a hotel not only within walking range but connected to the venue.  Yee hi!  I couldn’t believe the price was only $157.  Luckily it wasn’t convention season. We saw many many people at the hotel that also were from this city but also lived 40 minutes or so away and opted to stay at the hotel rather than drive.  Plus there’s no problem if you decide to have a few toddies before, during and after the concert.  And you can trust me here, there were many doing all three.  In the bar after, a woman of a certain age shows up with shorts on that read across the butt Bruno Mars.  Over her jeans.  Acting like she was on the cat walk.  No lady no.  That just ain’t the look. 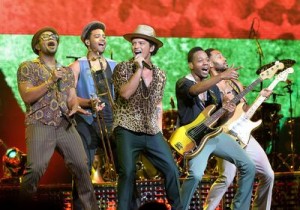 OK the concert.  I hear that Bruno is temperamental and I have seen him throw hissy fits when he doesn’t win a Grammy.  This night he would not let local media photographers take pictures plus when you wanted to buy a bottle of water, the concession staff said they couldn’t sell the water in the bottles because someone was afraid they’d get thrown at the stage.  So for $5 I got a  Dasani in a big cup.  Now I don’t understand this water bottle throwing thing.  Bruno’s audience is not that of Altamont (do I date myself?) but his audience is made up a wide range of age groups and a big portion of that is women.  From the teenager to the medicare crowd, the women were there to see a great singer who sings the romantic to R and B breakdown, a great dancer (both he and his musicians), a great musician (he played guitar, drums)  and a great showman.  Bruno knows how to show people a fantastic time.  As far as the women in the audience, he knows how to please them.  Even women of a certain age enjoyed the hip thrusting and floor pounding. What energy these guys have.  The band, except for a couple of solos by Bruno and then the pianist, these guys never, ever quite moving.  All of the requisite hits were played.  Keep in mind, he doesn’t have that large a repertoire so the show lasted 1 hour and 45 minutes (I’ve been to the Elton John/ Billy Joel marathons).  But Bruno is young and if he can stay out of trouble and keep a clear head, this young “twerp” is going far far far…My sister and I, women of a certain age, say that if we were, oh, 20 years younger, we’d have lasered in on Bruno, Spanx and all. And he wouldn’t have had a chance ;))

Many people looked strangely at me when I said I … END_OF_DOCUMENT_TOKEN_TO_BE_REPLACED

Well, more like sings along while in the last row … END_OF_DOCUMENT_TOKEN_TO_BE_REPLACED