Because I “enjoyed” reading Schindler’s List, that is if you can say you “enjoyed” reading it (well at least I didn’t neck while watching the movie like Seinfeld did), I decided to read Keneally’s newest historical novel, The Daughters of Mars.  This is a novel I believe, foremost, to be about sisterhood.  Secondly, it’s about the nurses of The Great War, WWI.  And thirdly, it’s about WWI.  It’s a semi-long book, 517 pages and at times it does ramble, but the majority of the time you are captivated by the lives of the two main characters, the Durance sisters, Naomi and Sally.  They are from “the bush” country of Australia.  Naomi leaves the country farm to be a nurse in Sydney and Sally , also a nurse, stays at home to take care of their mother, who is dying of   cervical cancer.  She saves up a lethal dose of morphine to put her mother out of her misery.  One day her sister Naomi comes to stay, and while Sally is asleep and Naomi is at her mother’s bedside, their mother dies.  Sally finds that her stash of morphine has disappeared and believes that Naomi has done the merciful thing, something she’s ashamed to say that she wished she had the mental strength to do.  This secret has a toll on their relationship but becomes a catalyst for a bond they never thought they could achieve.  Read more… Naomi decides there is more to life than living and working in Sydney and signs up to become a volunteer nurse to minister to wounded Australian soldiers serving in Africa, Asia and Europe.  Sally, unbeknownst to Naomi, does the same thing. As the narrative of the sisters proceeds, there is, of course, some “history” in the novel regarding the battles of WWI.  The battle that christens the sisters into the misery of war is that of Gallipoli.  Gallipoli is a big deal in Australia and is commemorated on April 25 of each year.  It should be.  Australia lost 8,700 men at Gallipoli.  The sisters see the war action up close and personal.  They see human bodies savaged by shells, bullets, shrapnel, trench foot, gangrene, mustard gas, typhoid, shell shock and influenza.  “On a cot before them lay a man whose wound once unbandaged showed a face that was half steak and no eyes.  The lack of features made his age impossible to guess.” 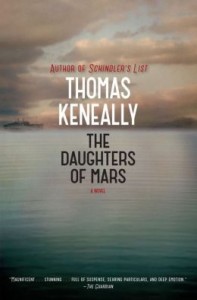 The sisters start out in Cairo and then are moved to a hospital “black ship” (a black out of all lights etc and the red cross gone) meaning it will be a hospital vessel once again once it drops troops at Gallipoli.   But on their way there, the ship is torpedoed.  This is a harrowing account.  The ship is sinking and the girls as well as soldiers and fellow nurses cling to the remaining life boats.  They hear “huge metal shrieks and thumps… within the ship and the unearthly lament of mules and ponies went on…A horse with bulging eyes came swimming up, the sort they might use to pull a canon.”  Keneally vividly describes the sinking ship: “Men still on the ship were now reduced to jumping from the stern or sliding down its curves.  She saw two land in the churning propeller which cut them in sections and threw their blood about in a terrible mist so instant you could doubt it had happened.” He also vividly describes the complacent air of those that simply moaned and let go of the raft to drift to the bottom of the sea.

The girls are sent to the Greek island of Lemnos and are treated not as Florence Nightingales but as sub par medical cleaning ladies and to sexual harassment and subjugation.  As Naomi says, “They’ll never be able to print the story of the sinking ship  because we weren’t hysterical enough.”  Even with the larger picture of the war looming, Keneally does offer a picture into the private lives of our sisters and their fellow nurses.  He tries to show that even in these trying times there is a need for humanity and love.  There are furtive kisses and fumbling, love gained and in war, love lost.

Keneally’s primary sources for the novel were the wartime journals of the Australian nurses, unearthed in state archives.  He also tried to add authenticity to his writing by writing in a style reminiscent of the time.  He says in his Author’s Note, “The punctuation used in this narrative might seem occasionally eccentric, but is designed to honor that of the forgotten private journals of the Great War, written by men and women who frequently favored dashed rather than commas.”  It does take awhile to get used to but once you’re into the story, it becomes a part of the narrative.  Everything in this novel, as the reveiwer from NPR says, “lives and breathes with marvelous intensity”.  As Naomi takes her sister by the chin and commands Sally, she says, “There are only two choices, you know.  Either die or live well.  We live on behalf of thousands who don’t.  Millions.  So let’s not mope about it, eh?”

Keneally plays with few literary effects except for the final chapter.  There he offers us alternate postwar futures for the sisters.  That I didn’t like.  For such a straightforward book about the bonds of sisterhood, the carnage of war, the simple determination to live or die just didn’t seem right to me.  The only thing I can think of is that wars are full of ambiguities and vagaries.  What allowed some to live and others die?

Many people looked strangely at me when I said I … END_OF_DOCUMENT_TOKEN_TO_BE_REPLACED

Well, more like sings along while in the last row … END_OF_DOCUMENT_TOKEN_TO_BE_REPLACED