I don’t think anyone writes “gross” as well as Stephen King.  He just has this ability to get you to visualize a scene.  I’ll get to the scene in a moment.  In Doctor Sleep,  he brings back the character of Danny Torrence, the little boy in The Shining.  In interviews King says that when fans ask about the fate of specific characters (the one’s that actually live through the horror), he’s been more interested in the those that question the fate of Danny.  I think most people who have seen the movie remember the cute little boy on a tricycle with a bowl haircut racing down the empty corridors of The Overlook Hotel.  Later to run from a mad “white knuckle alcoholic” who was his father.  Read more…

Doctor Sleep is,  in my opinion, semi autobiographical.  Like Duma Key, which deals with the aftermath of a man who is in a horrendous accident (like King in real life), Doctor Sleep deals with the reality of a recovering alcoholic.  I didn’t know King was an alcoholic, but he has been in recovery for over twenty years.  So he knows the depths to which one can plunge as well as the difficulties in trying to remain sober. In Doctor Sleep, Danny is an alcoholic like his father and a chain smoker like his mother (who, in the novel, has died of lung cancer). When writing the book, King’s son, Owen, told him that the “plunge” he had given Danny, now Dan, was not far enough to equal the plunge Dan’s father, Jack, had taken.  So, if you don’t want gross, speed read ahead.  Dan, after having picked up a girl, gotten in a fight, spends all of his paycheck on cocaine, wakes up still drunk and has to go to the bathroom.  “Another lurch from his unhappy gut…That released all of the puke triggers: the vinegar smell of hard cooked eggs in a big glass jar, the taste of barbecue-flavored pork rinds, the sight of french fries drowning in a ketchup nosebleed.  All of that crammed into his mouth last night between shots.  He was going to spew…”  And that he does in spectacular fashion.  But that leads to the main reason for the scene…Dan’s plunge.  As he’s leaving the bathroom, out of another room comes a toddler with a baggy nappie full of everything a baby discards, sees the coke on the table, runs to it crying, “canny, mama, canny!”  Danny keeps him from  getting the “canny” and the little boy falls asleep with his drunk mother.  Danny notices bruises on the little boy’s body. While the mom is passed out, he goes through her wallet taking all of her money.  Justifying this by saying she’d been the one who made him spend his paycheck on coke.  The taking of the money haunts Dan.  And the bruises on the little boy haunt Dan.  This, to me, is the real crux of this novel…the demons of a past life Dan can not seem to be rid of… his murderous, alcoholic father, the dead but not dead people from The Overlook who visit him leaving behind pieces of their rotting, putrefying bodies and the mother with her bruised baby boy.  Dan discovers “that memories are the real ghosts” and that, “you take yourself with you, wherever you go.” 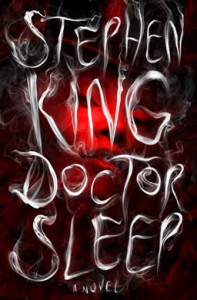 Of course in every King novel there has to be some type of supernatural forces causing havoc.  In this novel, we finally learn what “the shining” really is.  It’s the ability to read other people’s minds, or move objects, or project out of  one’s self.  Dan has it and so does a young teenage girl named Abra.  And they have to battle a bunch of centuries old serial killers, the True Knot, disguised as RV driving pensioners who literally feed off the pain of others. They only feed on those with “the shining”, and they make their deaths particularly brutal.  Makes for better “steam”.  They get a big kick out of 9/11 and other tragedies.  The leader of this group, a woman named Rose, has a tusk.

In Doctor Sleep, Dan fights his past with much greater dread and sense of terror than he does the woman with the tusk.  Dan does, through AA, “come to know a new freedom and new happiness.”  He also comes to realize that he “will not regret the past nor wish to shut the door on it.”  On a scale of 1-5, 5 being terrific, I would give it a 4 based solely on Danny/Dan’s story.

Post script:  I knew something smelled familiar with the red mist and the steam in this novel that I had seen before …It’s in The Green Mile when John Coffey is trying to heal someone.  As he is taking in the “disease” or whatever, he inhales the disease as if it were a horde of insects and then exhales the disease as the insects.  Very clever Stephen…In  Doctor Sleep, cloud, mist, it is only death.

Many people looked strangely at me when I said I … END_OF_DOCUMENT_TOKEN_TO_BE_REPLACED

Well, more like sings along while in the last row … END_OF_DOCUMENT_TOKEN_TO_BE_REPLACED