When I told my sister that we would see Maasai, I thought she was going to cry.  She really wanted to see them.  She asked, do you think we can trade with them?  I remember when I went to a Maasai village in 1983 in Kenya, the inhabitants wanted our film canisters to make ear rings.  The village was not “sanitized” (I’ll explain that later).  This village was the real deal.  Cow dung all over, flies every where, and poverty.  I explained to my sister that what she should expect is to pay them money to take their pictures.  And that we did have to do.  The Maasai believe that if their picture is taken, you, as the photographer, have already taken their blood.  Yes, that may be but they’ve also decided that by charging for pictures, it’s a great money maker.  But the modern Maasai have also decided that they are tired of business entities using their name so “they” (that’s the real problem.  Who is “they”?) are looking into trademarking the name “Maasai”.  There are already  major brands using the name “Maasai” as part of their product lines i.e. Land Rover using the name for accessories for their vehicles, a running shoe carries the name as well as a line from Louie Vuitton.  If the Maasai are successful, it would be the largest cultural brand in the world. I would equate this to the US government allowing Indian reservations to have casinos and sell tax free cigarettes.  A windfall for the Maasai.

Our first camp, Tarangire Treetops,  is a member of the Elewana collection.  They have 8 lodges/camps throughout Tanzania, Kenya and Zanzibar.  We stayed in 4.  Treetops is located in the heart of the Maasai territory.  So while driving in we see their herds, primarily goats and cattle.  At one point we did see a child, about 5 or 6 with a small stick in his hand,  herding baby goats.  Would have loved to take a picture but not allowed.  An iconic picture would have been of a tall Maasai wrapped in a scarlet blanket standing against a baobab tree. No picture.  A little while later a young herder, about 14 or 15, runs toward our Land Rover and stops us to ask for a bottle of water.  No picture. The lodge of Treetops has negotiated with the Maasai to allow the camp to exist in their territory and the lodge will then hire the Maasai for work around the lodge.  We had an excellent bar-b-q within a boma (what we call a corral but made with limbs and brush) and the Maasai performed a wonderful dance and song for us.  Pictures allowed.  As well as video…which, of course, I have. 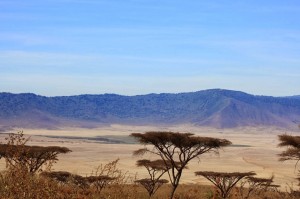 We then moved on to our second camp, The Manor, which is located inside of an active coffee plantation.  This “hotel” has more of an East Africa English Colonial feel.  We had our own beautiful suite with a clawed tub, siting area and fireplace.  The next day we head to the Ngorogoro Crater. The Ngorogoro Crater is actually the caldera of an ancient volcano.  It means the center of the volcano collapsed surrounded by the rim.  The crater is a UNESCO (United Nations Educational Scientific and Cultural Organization) World Heritage Site.  It is an amazing site.  After we leave the Crater, we are scheduled for a visit to a Maasai Village.  This is the sanitized visit I had warned my sister about.  In order for us to visit, our tour company had to pay the Maasai for our visit.  At this point, you were free to take pictures because you were paying for them.  Everything was clean and scrubbed.  The villagers did a perfunctory dance and song for us but, hey, at this point, we got the picture (pun intended).  Instead of wanting film canisters, they wanted us to buy their very expensive trinkets.  And they are very good negotiators.  Or, shall I say, they don’t negotiate.  You want? You pay our price.  I did have a fun moment doing a dance with a lady using their beautiful necklaces.  And she took my hand and sang me a very nice song…of course I have no idea what she was singing. On the way back to our we saw a group of men with an old bathtub.  Now what were they going to do with that?  Well, they drug it to the top of a big hole and inside the hole were young men who had dug deep enough to find water.  They then would hand the buckets full of water to the older men who would then put it in the tub for the cattle to drink.  My sister of I were tired of this no picture thing.  This was too good to pass up.  I have a flip video camera, which is quite small, and from inside the Land Rover began filming.  My sister on the other hand, stands up, looks out of the roof and snaps a picture. The Maasai began yelling at our driver. She donated some money to the Maasai fund to assuage her guilt. 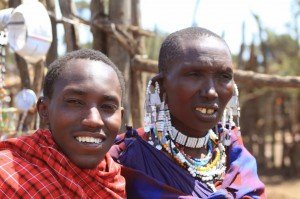 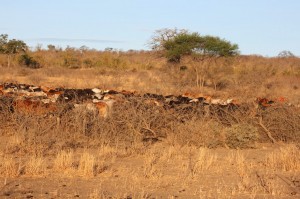 As I wrote earlier, the Treetops Lodge hires the Maasai for odd jobs.  One of these jobs is security such as walking the guests back to their rooms after dinner.  So off we go with two young Maasai men, I guess 15 or 16 years old.  They each have a walkie talkie.  Me, being me, asked the age old question of, “what would you do if we encountered a lion?”  Without skipping a beat, one of the young men grabs the walkie talkie and says, “I’d call for help.”  My sister and I almost died laughing.

Many people looked strangely at me when I said I … END_OF_DOCUMENT_TOKEN_TO_BE_REPLACED

Well, more like sings along while in the last row … END_OF_DOCUMENT_TOKEN_TO_BE_REPLACED