I always read the Friday and Saturday Wall Street Journal editions because they include numerous cultural opinion pieces as well as travel advice and recipes from renowned chefs.  In this one edition there was a two page article on See Grown-ups Read.  It concerned the new phenomenon of adults reading books targeted to pre-teens and teens i.e. The Twilight series as well as Hunger Games.  One of the books mentioned was Wonderwhich was published in Feb. of 2012.  So I decided to “satisfy my curiosity” by reading the book.  It was meant to be read by 8-12 year olds.  No matter.  This book is so well written it can give an adult leaky eyes.  The novel is centered around 10 year old August Pullman, an ordinary boy, according to August (Auggie).  He plays X-box, rides a bike, eats ice cream and has a wonderfully loving family.  The thing is Auggie is not an ordinary boy.  Auggie has a horrible facial disfigurement and has undergone 27 reconstructive surgeries.  He tells us that, “I won’t describe what I look like.  Whatever you’re thinking, it’s probably worse.”  The author does tell us about Auggie’s craniofacial abnormalities via his sister, Via, and his other schoolmates.  He has “a mushed up face”, he “eats like a tortoise”, and he has cheeks “that looked punched in”. 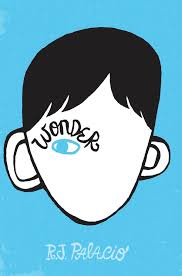 Auggie has been home schooled until one day his Mom proposes he go to a private middle school close to their home.  Naturally, at first, he doesn’t want to go.  He has experienced too many insensitive people talking behind their hands or staring in shock.  He says, “I wish every day could be Halloween.  We could all wear masks all of the time.  Then we could walk around and get to know each other before we got to see what we looked like under the masks.”   What Palacio does is make Auggie a wonderfully strong and enduring character.  He’s smart, he’s funny and courageous.  Even though his father believes that Auggie’s going to school will be like “a lamb to the slaughter”, Auggie perseveres.  Like many kids, he is bullied.  There are many injustices perpetuated against Auggie by older, bigger students.   But he eventually is surrounded by a cadre of students that watch out for his well being.

The story is told from a variety of points of view.  Other than Auggie’s chapters, pay attention to those of his sister, Via.  Via loves her brother.  But as she gets older, she realizes that her brother is the sun and the rest of the family orbits around him, “We circle around him like he’s still the baby he used to be.”  She wrestles with her resentment, guilt and concern.  She doesn’t want the kids at her new high school to know Auggie is her brother because she wants to be known as Via and not as the sister to ET.

This is the kind of book you can read aloud with your kids.  Do a mini book club with them.  They will learn a great deal about kindness.  As a teacher in the novel says, “Be kinder than is necessary.  Because it’s not enough to be kind.  One should be kinder than needed.”  We all could use a refresher course on that item.
Other books recommended for the 8-80 crowd…Flora and Ulysses by Kate DiCamillo, Navigating Early by Clare Vanderpool, Counting by 7’s by Holly Goldberg Sloan, and Out of My Mindby Sharon Draper.
http://www.blogcatalog.com/directory/society/politics/conservative/

Many people looked strangely at me when I said I … END_OF_DOCUMENT_TOKEN_TO_BE_REPLACED

Well, more like sings along while in the last row … END_OF_DOCUMENT_TOKEN_TO_BE_REPLACED