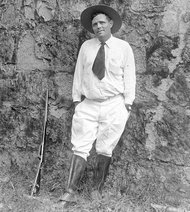 Over the years I’ve read snippets about the life of Jack London.  Everything I read led me to believe he had been an interesting man.  So when a new biography came out, Jack London: An American Life written by Earle Labor, I had enough interest to buy it.  I am very happy that I did.  The life that Jack London lived was an amazing one.  Amazing because he packed so much adventure, so much love for writing, so much love for animals, so much love for his wife into such a short life.  He was born in 1876 and died at the age of 40 in 1916.  What a life.  This may sound like hyperbole but what a man.  From the beginning,  London longed to succeed.  He had a lot going for him physically.  He was handsome, he was strong from all of the hard labor he did and even though he was shy, he never allowed himself to be bullied.  For him, to lose was not acceptable. He was not afraid to break the law in order to survive.  But during the time he was growing up, in order to survive, you did what you  had to do. Many of the situations he found himself in were places where human cruelty was the norm. By the age of 22 he had worked as a child laborer in a factory,  he was a professional oyster pirate, served time in prison for something he didn’t do, ridden the rails as a hobo, worked as a sailor on a seal hunting schooner bound for Japan , marched as a soldier in an army of the unemployed for the betterment of the working man, and searched for gold in the Klondike.  He also became an alcoholic.

As varied as his life was one thing was a constant.  That constant was his love of reading and writing.  When he was a teenager, he entered a writing contest and won first prize, $25.  From then on he continued to write.  At first, he was a failure with rejection notice after rejection notice.  He even went back to high school to hone his writing skills.  He wrote for the school news paper and was on the debating team.  But once he began writing about his experiences and those of the other Klondike veterans, his literary career took off.  He vowed that every day he would write a minimum of 1000 words.  Even though he might be abysmally ill from some tropical disease, he wrote.  His work ethic was astounding.  He wrote The Call of the Wild, The Sea -Wolf, Martin Eden and the non-fiction The People of the Abyss.  London lived life fully which meant he spent a great deal of money.  The more money he spent, the more he wrote.  Not necessarily classics but “potboiler” stories that he sold to mass publications.  With this penchant for earning money, he was living a contradiction.  He was a proud socialist.  That’s why he marched with the army of the unemployed and lived for a year in London’s notorious East End.  He wanted to showcase the plight of the poor.

But the older he got the less he believed that socialism was the answer to the world’s ills.

London was married twice.  His first wife gave him two daughters.  His second wife, Charmain Kittredge,  became the love of his life as well as a match intellectually and physically.  She even had boxing matches with him.  During his marriage to Charmain, he went on one of the biggest adventures of his life.  They had a boat built, The Snark, and sailed to Hawaii and then the South Seas.  This trip was one of idyllic wanderings as well as terrifying circumstances.  He returned from this trip as one of the most famous writers in America.  He also returned with a myriad of tropical diseases.  Between these diseases and his alcoholism, his health began to fail which then led to his untimely death.

The author, Earle Labor, says this of Jack London, “few writers mirror so clearly the American Dream of success and the corollary idea of the Self-Made Man”. I would say he was more like the title of a Tom Wolfe novel, A Man in Full.

Many people looked strangely at me when I said I … END_OF_DOCUMENT_TOKEN_TO_BE_REPLACED

Well, more like sings along while in the last row … END_OF_DOCUMENT_TOKEN_TO_BE_REPLACED