I’m not that big into historical fiction.  At least the kind where the author takes a real person and then builds a life based on skeleton facts.   I don’t know how I can avoid it considering the number of books out there that are of that genre.  In one of Amazon’s emails they mentioned Belle Cora by Phillip Margulies.  I may not be a sucker for historical fiction but I am a sucker for stories about “fallen women”.  I had just finished Amy Tan’s The Valley of Amazement about courtesans in Shanghai and had enjoyed it.  So why not just stick to the topic?  The frame work of the novel  is that of a memoir.  The main character, Arabella Godwin,  is old and frail and has just survived the great 1906  San Francisco earthquake and fire.  She decides she wants to leave a legacy regarding her life, therefore, the memoir.  Her journey starts in New York circa 1837 and ends in San Francisco.  Arabella begins her life as a well heeled young lady and ends her life as a notorious madam and prostitute.  What happens in between those life posts?  When Arabella is 12, her parents die and her wealthy grandfather decides he’s going to send her two older brothers to boarding school but Arabella and her younger brother, Lewis, are sent to relatives in upstate New York.  Her Aunt Agatha and Uncle Elihu are task masters  who strongly believe in God and corporal punishment.  As Arabella adjusts, she falls in love with Jeptha, a local boy who just happens to be in the romantic sites of Arabella’s cousin, Agnes.  Agnes is a total schemer ( good thing FB wasn’t around).  I digress.  Unfortunately Arabella is raped by her brutish cousin, Matthew, and becomes pregnant.  Jeptha thinks she was agreeable to having sex with Matthew.  He finds religion and moves away.  And away goes the story taking Arabella and Lewis to New York City.  She becomes a prostitute and he a thug for a gang. The lure of the gold rush and quick money, as well as the specter of murder hanging over the now Belle’s head,  propels them westward.

As with all historical fiction there does need to be some threads of truth.  Margulies does an excellent job of creating the world of San Francisco and the gold rush era.  A part of this depiction is a group called The Committee of Vigilance.  They were a group that took the law into their own hands and played tough politics.  That’s where the real story of Belle comes in.  Belle’s real name was Belle Ryan and she was the daughter of a preacher.  As madam of a “house”, she was looked down  upon by the patrons of San Francisco.  She and her lover, Charles Cora, went to the opera.  There they were confronted by a U.S. Marshall who took umbrage to the fact that Belle and Charles were acting like regular folks.  He wanted them to leave.  One thing led to another and Cora ends up shooting the marshal.  The Committee for Vigilance then takes matters into their own hands.  Belle, as in the novel, ends up further disgraced and is no longer able to continue as a madam.

The Belle, in the novel,  is at times a heroine and you feel compassion for her.  But there are definitely times when you do feel contempt for the choices she makes.  This book kept me enthralled.  It led me to look online to try and find out about the real Belle.  The picture is of the real Belle’s “house”. 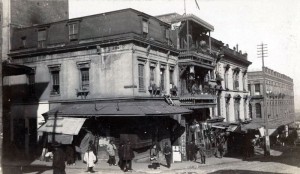 Many people looked strangely at me when I said I … END_OF_DOCUMENT_TOKEN_TO_BE_REPLACED

Well, more like sings along while in the last row … END_OF_DOCUMENT_TOKEN_TO_BE_REPLACED