Since I thoroughly enjoyed Under the Tuscan Sun, I thought I’d give Ms. Mayes’ new autobiography, Under Magnolia,  about growing up in the south a try. Let me just say that Ms. Mayes and I do have some things in common. She grew up in a small Georgia town, and I grew up in a small Texas town, small meaning 800-1500 people. We both had absent parents. Her’s were absent by not caring and mine were just not there. She would hide out in palmetto jungles and I would hide out in hay bales. She would climb in a large bag with a flashlight so she could hide from her parents and sisters. I would climb up on the top shelf of our closet to get away. We both read books by a mulatto named Frank Yerby. They were early bodice rippers. I had no idea that he was a mulatto. We both were raised in a time of rampant racism. We both badly wanted to get away from our home towns. Both of our mothers played bridge. But that is where the similarity ends. Even though Ms. Mayes might want you to think that this is a homage to the south, it is not. Even though she has moved to North Carolina, she only exchanged Redwood trees for Magnolias. Her environment is very similar to that of San Francisco. She has ensconced herself, as she did in California, in an area full of painters, writers, poets, etc. It is not the south of her youth.  She detests that south. 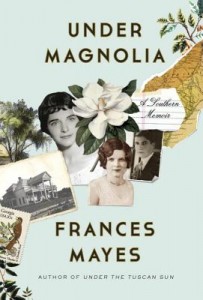 When you read Under Magnolia, you’d better have your thinking cap on because Ms. Mayes is going to make you understand that she is a COLLEGE PROFESSOR and she knows her stuff. This autobiography is prose (differentiating it from poetry). She’s going to show all of those people back in Fitzgerald, Georgia that she has made it and made it big time. There are tons and tons of references to literary writers, Faulkner to Dante, Wolfe to W.H. Auden, W.J. Cash(who?) to Bronte. There are numerous references to ancient Greece and Egypt. Strutting her knowledge.  This is how she sees her past, “I can look back and see decadence, old bigots, the constant racial slurs, the bores, the wild cards, the bighearted, the family album of alcoholics, the saints, the old aunt propped in a chair saying only ‘da-da ,’ the slow motion suicides, but at (ages) four, six, ten, they looked, powerful, not as types but as themselves.”

If you can get through all of this “look what I have made of myself” stuff and she’s retelling in detail about her life in a not normal family, that’s when she really makes her prose come to life. Her description of her parents, “My parents, powerful, slapdash, weary of children, continued to lead unexamined lives. The brakes simply were gone. Nothing to do except face each other. Southern Comfort, recriminations, and if onlys.”

I don’t remember Under the Tuscan Sun as being so full of itself. Pretentious. As one reviewer said, ” Skip Mayes’ preface. It’s an overly professorial discourse, almost treatise-like, that could discourage some to tuck into the actual story. That would be a shame.” Find the actual story and you’ll enjoy that.  Basically,  Ms. Mayes,  growing up in the south, was caught in a life not of her own design.

Many people looked strangely at me when I said I … END_OF_DOCUMENT_TOKEN_TO_BE_REPLACED

Well, more like sings along while in the last row … END_OF_DOCUMENT_TOKEN_TO_BE_REPLACED