I was with some girlfriends the other day and as girlfriends will be girlfriends, we were talking about everything including the kitchen sink.  We began talking about our parents.  One friend said that her elderly mother had asked her to stop asking,  “how are you doing.”  The mother felt that by asking her that the daughter could somehow jinx her. The other friend said she had been to see a motivational speaker who was the head minister for the Texas Port Ministry.  She said that the minister used this phrase to get people to look positively at their lives.  He’d begin a conversation with, “Tell me something good.”  My friend was head of HR at a large company and took this idea back to her staff.  When her staff started to use this phrase to begin their conversations with fellow employees, the employees were uncertain as to how to respond.  She got a lot of “well, I just finished a big project.”  But what a great suggestion for our mutual friend.  Now she’s going to say, “Mom, tell me something good.”  I said that in a way I sort of felt like her mother.  When people ask me how I’m doing, I respond with “good”.  Definitely not with a “great!”  I just have this feeling that the Big Guy will look down on me and say, “Doing great, huh? We’ll just see about that!”  I’m normally an optimistic person and don’t have pending doom thoughts.  So I decided to find out if, indeed, I am an optimist. 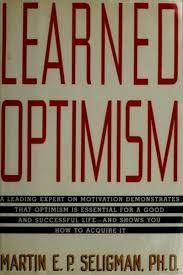 Which brought me to satisfy my curiosity as to what defines an optimist and what defines a pessimist.  I went on line and found a much discussed book on the topic.  It is Learned Optimism: How to Change Your Mind and Your Life by Martin E. P. Seligman, Ph. D..  Let’s just say I found out I definitely am an optimist.  And thank you Big Guy for that.   Dr. Seligman has studied these two groups for over 25 years.  I skipped over large portions of the book, but I was able to glean enough info to figure a few things out.  First, let’s look at the defining characteristics of a pessimist.  They have a sense of helplessness about their lives.  They tend to believe bad events will last a long time (permanence),  will undermine everything they do (pervasiveness), and are their own fault (personalization).  They are their own worst enemies.  Pessimists give up more easily and get depressed more often.  Dr. Seligman believes we are a nation in a state of depression.  According to the Dr., depression is the ultimate expression of pessimism.  He believes this epidemic is brought on by the “me” generation.  Depression is basically the “I” disorder, failing in your own eyes relative to your goals.  People are believing they are the center of the universe.  Such a belief system makes individual failure almost inconsolable.  We are raising generations of kids where they are taught that “self esteem” comes first.  “When these children confront the real world, and it tells them they are not as great as they have been taught, they lash out”…and sometimes with violence.  Unfortunately we’re seeing to much of this today with work place violence.   My friend in the HR department dealt with the “I” factor everyday.  What do you mean I won’t be VP by the time I’m 35?  What do you mean I did a shitty job?  Depression is ten times more prevalent today than it was 50 years ago. He sees depression as an epidemic of “learned” helplessness.  We’ve learned, through defeat, failure as well as by uncontrollable situations, that our actions are futile.    I have another answer to the question of “why more depression?”  Because doctors are prescribing more people for depression based solely on the patient saying, “I’m depressed.”  This happened to me.  I was going through a particularly hard time and I was chatting with my primary care physician about “so how’s life?”  As soon as I mentioned the situation, she asked, “You want to take something?”  I immediately said, “NO!”  The good Dr. talks about “temporary” depression.  But after looking at this series of questions, I realized that I don’t think I’ve ever thought like this.  There is a test that any qualified psychiatrist/psychologist will ask you to answer to see if you’re truly depressed.   Here are some of the questions:  During the past week were you 1. Bothered by things that usually don’t bother you? (there is a scale you are given) 2. Did you not feel like eating: my appetite was poor 3.  I felt I could not shake off the blues even with help from family and friends. 4. I felt that I was not as good as other people 5.  I felt helpless about the future.  There are a total of 20 questions.  And based on your answers they can determine if, indeed, you are truly depressed.  With severe depression suicide lurks.  He says there are usually two motives for suicide.  “The prospect of them going on is intolerable, and they want to end it all.  The other is manipulation: They want to get love back, or get revenge (the work place murder/suicide), or have the last word in an argument.”  They do get the last word.

What characteristics define the optimist?  When they are confronted with the same hard knocks of this world, they think about the misfortune in the opposite way.  They tend to believe defeat is just a temporary setback, that its causes are confined to this one case.  The optimist believes the defeat is not their fault: Circumstances, bad luck, or other people brought it about.  They are unfazed by defeat.  Now let me say this (and the good Dr. does discuss this).  There is such a thing as personal responsibility.  And you may try to ignore the fact that you caused something to screw up but, buddy, you did.  Take responsibility, learn from it and then the optimist moves on.

There is a quiz the good Dr. has devised that can answer the question as to whether you are an optimist or pessimist or something in between.  Here’s the link:  http://www.stanford.edu/class/msande271/onlinetools/LearnedOpt.html.  You might be surprised on where you land on the scale of optimism to pessimism.

As Chaka Khan and Rufus sang…Tell me something good, Uhn…

Many people looked strangely at me when I said I … END_OF_DOCUMENT_TOKEN_TO_BE_REPLACED

Well, more like sings along while in the last row … END_OF_DOCUMENT_TOKEN_TO_BE_REPLACED