I really don’t think I should use the phrase “women of a certain age” in conjunction with the word “weighs”.  Is that wrong?  The war against women.  Hmmm.  I think there has been a war against women since Eve took a delicious bite from that apple.  Am I shaped by the bucolic years of the 50’s?  Women in sheath dresses that played bridge and drank martinis.  Or by my teen years growing up in the 60’s?  Throwing out the bra and using the pill?   I’ve always been a women’s rights girl.  It began when I was a freshman in high school and told I could not take earth science because that was just for the boys.  I had to take typing.  Little did I know I’d actually need to use the damned key board in the 21st century.  But I’m at a point where I’m getting a little tired of this war against women IN THE UNITED STATES.  The rest of the world? The rest of the world is in dire need for a WAR FOR WOMEN.  You hear such awful stories of gang rapes (India) and mass kidnappings (Boko Haram), women being stoned to death, having to marry at the age of 13, having their genitals mutilated.  This hash tag thing, #bring back our girls, really?  Do you think that is really going to bring about any resolution to the crisis other than make you feel like you’re doing something? In many societies having male children is far more preferable than having  females.  These societies are now having a great deal of trouble because the males can’t find a female to marry and reproduce.  See my post on abortions worldwide.  No, it is not a treatise against abortion except for the fact girls are the ones being aborted: https://www.satisfyingmycuriosity.com/2011/07/14/165000000-choosing-boys-over-girls-and-the-repercussions-on-society/

Here in the states I feel we’ve now come to a point where we have a WAR AGAINST BOYS. Oh my goodness!  She’s got to be a conservative like Ann Romney or Sarah Palin!  No.  I just look at the facts ma’am.  I’m not saying that we should have fewer women as corporate executives or that women should make less than men.  I’m strongly with women’s libbers on that.  But me thinks that we are going backward, in some respect,  with our boys.    57% of all bachelor degrees go to women; 60% of all masters’ degrees go to women; 50% of all doctorates go to women.  That’s a good thing, right? Well, maybe…   The Department of Education has noted the following trends…The difference between girls and boys, when it comes to math and reading and writing, has grown larger.  A 15 year old boy writes like a 13 year old girl.  In honors’ math and science classes, 54%  are female.  According to the National Center for Education Statistics, girls now outnumber boys in student government, in honor societies, on school newspapers, and in debating clubs.  At the same time more boys are suspended from school, more are held back and more drop out.  Boys are three times as likely to to receive a diagnosis of ADHD.  And more are involved in crime, alcohol and drugs.  100% of the school shooters are male.  They also kill themselves…in 1997, a typical year, young people between the ages of 5-25,  701 females committed suicide as opposed to 3,782 males. 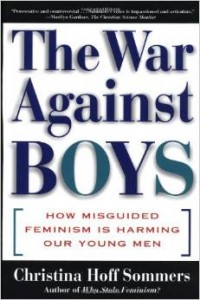 Here’s another consequence of the lack of education for our boys…our girls/women are “marrying down”.  The Pew Research Center points to a milestone…for the first time, the percentage of women marrying a man with a lesser education is greater than the percentage of men marrying women with a lesser education…21%-20%.  But the gap widens with newly weds…27% women vs 15% men.  This refers to EDUCATION only.

I want you to look at a few things if you have children.  What literature are your kids reading in school?  How much is oriented toward girls, Little House on the Prairie kind of stuff,  as opposed to Treasure Island?  They’ve done away with PE, haven’t they?  How do little boys run off their hyper activity and aggression?

I am damned proud of achievements and strides women have made in the US.  But isn’t this whole movement about equality?  Well, I’m afraid, according to the statistics, that we’re going backwards on that movement…for the boys.  Can’t we have it both ways?  If you’d like a more in depth discussion on this topic please follow this link to Atlantic Magazine:

Many people looked strangely at me when I said I … END_OF_DOCUMENT_TOKEN_TO_BE_REPLACED

Well, more like sings along while in the last row … END_OF_DOCUMENT_TOKEN_TO_BE_REPLACED