Summer always brings out the “browser” in me when it comes to reading.  I’ll read a little of this and a little of that to satisfy my curiosity about different genres on the market.  Here are a few books that I’ve just read …Authors Greg Iles, Chris Moore, Craig Johnson, Lynn Steward, Robert Louis Stevenson

I’ll start with a murder mystery past and present.  It’s Greg Iles’ new one, Natchez Burning.  This book will keep you riveted.  It flashes back and forth from the civi 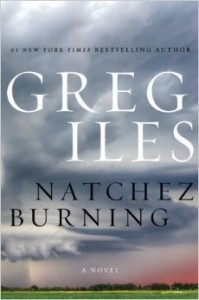 l rights movement of the 1960’s to the present day.  A present day reporter is trying to find the murderers in several cold cases from the ’60’s.  They are the brutal murders of black men perpetrated by an off shoot of the Klan, the Double Eagles.  The present day murder is of a black nurse supposedly committed by her ex boss, Dr. Tom Cage.  Dr. Cage’s son,  Penn, is the small town’s mayor.  His crusade to save his father stirs up the nest of the still poisonous racists.  Many of the horrific deeds of the Klan are told in detail and can be difficult to read.  Iles does not make these tales of death and torture up.  They come straight from the reporting of Stanley Nelson from the Concordia Sentinel Reporter.  Be aware that this is the first in a trilogy.  My husband is half way through and is enthralled with the book.  The next book should be out next year. Amazon 4 1/2*

I came to read the Walt Longmire series by Craig Johnson because of the TV series Longmire.  The setting is the beautiful terrain of Wyoming and the local Indian reservations.  In the TV series the main character, who is the sheriff,  is Walt played by Robert Taylor, a very handsome rugged cowboy type.  His best friend is Standing Bear played by Lou Diamond Phillips who owns the Red Pony bar frequented by all types of unsavory characters.  It’s difficult to solve crimes in this locale because everything is so spread out and the sheriff has to deal with the local reservation police which aren’t exactly forthcoming in helping Walt.  There are your typical wealthy, domineering cattle ranchers, your greedy Indian casino operators and women with hearts of gold, illegal immigrants, sex traders etc.   I like the books because they go so much more in depth about the beauty of the land as well as adding more intricacy to the plots.  Series Amazon 4 1/2-5*

Christopher Moore’s The Serpent of Venice is NOT for everyone.  These are very clever books that can take a little time trying to unravel.  This one deals with Fool, a clown, who is a rakish dude that dresses in harlequin and wears a huge codpiece.  It is bawdy humor so beware.  Last time we saw Fool it was in a parody of King Lear.  Here Moore takes Othello, The Merchant of Venice and The Cask of Amontillado and throws them into a big pot, stirs and whips up a tale of gratuitous shagging, murder most foul, and split infinitives with non traditional grammar.  I laugh out loud while reading his books.  But then again I am an adventurous reader. Amazon 4 1/2*

Want a chick lit beach read?  With full disclosure I was sent this book by a PR firm to see what I thought of it.  It’s  A Very Good Life by Lynn Steward.  Ms. Steward is 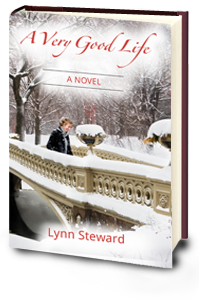 trying to create a recurring character with her main protagonist, Dana McGarry.  Dana is a special events coordinator for a big department store in NYC.  Her husband, Brett, is a junior law associate at a big name large firm.  He’s trying to make partner.  The problem is they both have agendas dealing with their careers and sometimes those agendas don’t make for a happy home. There are a lot of stereotypes in this novel particularly Brett (whom I disliked instantly) and his beautiful, conniving, corporate ladder climbing bombshell of an associate.   But, it’s a fun read and it does deal with issues that many women deal with today (even though it takes place in 1974).  How much should your career come into the equation when deciding whether to have a family?  How do you determine your own purpose in life?  Are you your own person or someone you created to please your spouse?  Amazon 4*

I have never, ever read Robert Louis Stevenson’s Treasure Island.  While I was researching my blog on the war against women, this book came up as one that boys love to read.  But as a reviewer in the WSJ said, it’s a book  “of and for all ages”.  I concur.  Stevenson wrote to a friend, “It’s awful fun boys’ stories; you just indulge the pleasure of your heart, that’s all.”  We’ve got Long John Silver (who knew he’d be a fish restaurant) and his peg leg, we’ve got Jim, the young boy out to find treasure and of course, the 200 year old talking parrot who constantly shrieks “pieces of eight, pieces of eight”.  There’s a lot for young kids to learn and a lot for adults to remember about judging character, never falling for superficial charm, never assuming others are as we would like them to be.  As the WSJ reviewer said, “Courage and honor are for each boy or man to find for himself, as the developing conscience and inner voice that Jim’s first person narrative embodies.”  Amazon 4 1/2*

Many people looked strangely at me when I said I … END_OF_DOCUMENT_TOKEN_TO_BE_REPLACED

Well, more like sings along while in the last row … END_OF_DOCUMENT_TOKEN_TO_BE_REPLACED