You hear this about  alcoholics and drug addicts.  I had Afrin bottles in every room, in all of my purses and took at least 2-3 bottles on every 1-2 week trip.  The only difference was I didn’t hide them.  Right there in plain site.  What’s the issue?  It’s over the counter stuff, right?  Well, there are issues and they can be unpleasant ones.  In all due respect to Afrin, they are not the only culprit on the market that is hard to stop using.  Addiction may not be the right word but it sure comes close.   Here’s the issue with Afrin, Neo-Synephrine, Zicam etc.  It’s the problem with “rebound” issues.  What happens is this:  You get a stuffy nose.  You can’t breath while trying to sleep.  Want to sleep?  Use a nasal spray.  Ahhhh relief.  That’s fine as long as you follow the directions and not use for MORE THAN 3 days.  If you do, rebound!  What that means is that the spray can cause your nasal linings to swell again and, voila! you’re stuffy again.  Where’s that spray?  I know I have one somewhere.  Even though the cold or allergy or sinusitis is over with, you still have a need to use the spray.  I know.  This has happened to me more than once.  My problem is I’m claustrophobic.  Which means I have a fear of being closed in.  That,  along with my asthma, meaning can’t breath, plus stuffy nose…equals nose sprays.  OK so there is a rebound effect.  So?  Here are also two very important issues to consider.  This also happened to me.  I get allergy injections.  Other than my 5 week interval shots, I have to see my allergist every 6 months for a “breathing” physical.  Blow into that stupid Spirometer thingy.  Last year my blood pressure was up.  He asked me how I was doing.  I said “fine” except for a stuffy nose.  He asked, “what are you usin 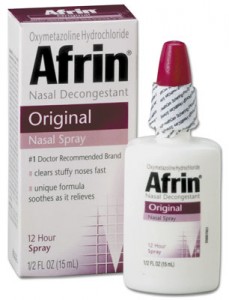 g?”  I said cautiously, “Afrin”.  How long, he queried?  “2-3 weeks”…”That’s probably why your blood pressure is up.”  He said he had a 25 year old guy come in with his allergies and his blood pressure was up. Why?  He was using Afrin like crazy.  A friend of mine, who is a cardiologist, also tries to get her patients off of over the counter nasal sprays because of the blood pressure issues.  The other major issue is, after prolonged use, particularly years, is that the inside of your nose looks like a chemical burn.  And you can actually get a hole in your nasal septum, the structure that separates the two breathing passages, from nasal spray abuse.

So, then, what do you do?  Well, you can go to a doctor like I did and they can give you prednisone.  But there are issues with that delightful drug.  Or get a prescription for Flonase or Nasonex which, after taken a few days,  will build up your resistance to whatever is irritating your nasal passages.  Or you can try alternative measures.  I’ve gone the Neil Med route, which is basically a saline spray.  Not good for a stuffy nose but good for moisturizing and cleansing the nasal passages.  I went to a GNC and asked what they had.  Nothing that looked like it would work.  Tried a few holistic things from Whole Foods.  Zip.  There is one thing that will definitely take your mind off of your stuffy nose and that’s, no, not sex, but a spray with the active ingredient of capsicum, in other words, pepper.  Whoa.  That sucker burns.  But it sure takes your mind off of the stuffy nose.  The brand I’ve used is Sinus Buster Nasal Spray and can be found online or at Walgreens.  And by the the way, I do believe that there are some psychosomatic issues with a stuffy nose.  I can think I have a stuffy nose, and then begin to get occupied with something else, and, hmmm, no stuffy nose.  That is something to think about.  Another thing to try would be those nasal strips that you adhere to either side of your nose.  Haven’t tried those yet.  The thing I’m trying to avoid is surgery.  I guess I need to go to an ENT to see if I have a deviated septum.  Back to the claustrophobia thing…cotton ball stuffed in my nose and can’t breath?  Shivers up and down my spine.

So how am I?  Well, I had this upper respiratory infection which caused a stuffy nose…I’m on the downside of using.  I’m now down to using twice a day.  Once before bed time and once when I get up.  I’m hoping I can be free and clear in a couple of weeks.  Just kidding.  I hope a couple of days. But I’m afraid that red capped, white bottle will always be on trips with me.  It’s like my asthma inhaler, goes where ever I go…

Many people looked strangely at me when I said I … END_OF_DOCUMENT_TOKEN_TO_BE_REPLACED

Well, more like sings along while in the last row … END_OF_DOCUMENT_TOKEN_TO_BE_REPLACED