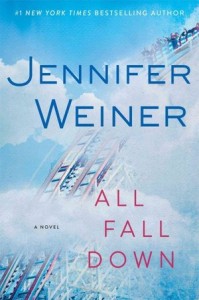 Don’t worry.  I’m not addicted.  Don’t touch the stuff.   But apparently there are plenty of people out there that do.  I really didn’t pay much attention to this topic until I read Jennifer Weiner’s new book, All Fall Down.   If you’re not familiar with opiates, here’s the scoop.  Most adults have at some time in their life taken an opiate.  They’re prescription pain relievers and tranquilizers such as Vicodin, Adderall, OxyContin, Valium etc.  In addition to adults taking these opiates, they have pretty much become the drug of choice with our youth.  According to the National Institute on Drug Abuse, nearly 1 in 12 high school seniors reported non medical use of Vicodin; 1 in 20 reported abuse of OxyContin.  Overall usage in the US for the entire population has risen.   Between 1991 and 2010 prescriptions for opiates rose from 75.5 million to 209.5 million.  That’s a lot of drugs folks.  What has happened is that this new drug culture has turned the rehab business into a different being.  Once  they were simply treating alcoholics with 12 steps.   Now they’re treating a different monster.  Opiates are drugs that are highly addictive and very difficult to treat and manage.  What’s driving this trend?  Too many things perhaps.  A misconception about their safety?  They are prescribed by doctors, right?  How bad can that be?  Well, very bad indeed.  Two words…addiction/overdose.  Then there are the motives:   to get high, to relieve anxiety, pain, or sleep problems.  The pain issue is the one that got Weiner’s character, Allison Weiss,  in trouble.  She had hurt her back during a workout section.  I didn’t particularly like her character.  Too whiny for me.  She has an overly sensitive daughter, literally overly sensitive…to sound, to touch, to smell.  Makes for a difficult upbringing.  But Allison, who writes a blog on women, motherhood and spousal relationships, takes everything on.  She has to do everything or it won’t get done.  In order to be this domestic superwoman, guess what?  She starts abusing the opiates.  She begins to doctor shop (can you say Rush Limbaugh?), ordering stuff off of the internet, going through friends’ medicine cabinets.  Of course her world begins to crumble and therefore, the title, All Fall Down.  She, like all addicts, thinks they’re getting away with stuff.  That no one is paying attention to their lying, stumbling, slurring.  People are paying attention.  At first her husband chooses to ignore what’s going on.  But after she tries to pick up her daughter and her friends from school and the principal notices she is impaired, the proverbial shit hits the fan.  The issue can no longer be ignored.  Allison does what so many addicts do.  She goes to rehab because she’s afraid she will lose her daughter.  Also, like most addicts, she has no intention of quitting.  She can “control” it.  Right.  ‘Fraid not.  There are no solid statistics on how many times a person relapses.  I asked a psychologist friend of mine who deals with addiction, and she says it’s common for a person to relapse 10 or more times.  If you want to read a better book on addiction than All Fall Down, read Stephen King’s Doctor Sleep.  Yes, you have to put up with the supernatural stuff, but the portion on the main character’s alcohol addiction is riveting.  Here are some final statistics from the US Substance Abuse and Mental Health Services Admin.  They break the % of addicts seeking treatment down to these:  23% alcohol abuse, 18% alcohol and drugs, 17% pot, 40% heroin, cocaine and opiates.  Read more about opiate addiction and women:  http://www.nbcnews.com/health/womens-health/opiate-overdose-deaths-skyrocketed-women-cdc-finds-f6C10509026

Addendum, 8/22/2014…Big headline in today’s WSJ, Clampdown on Popular Painkillers.  “The Center for Disease Control and Prevention has said that more than 16,500 people died after overdosing on opioid based painkillers in 2010.  No other class of drugs, legal or illegal, is responsible for so many deaths.”  Major changes: You’ll have to get a new prescription every 90 days instead of one for 180 days.  You will now have to bring in a prescription as opposed to having it faxed or phoned in.  And the pharmacies will have to put them in a secured location.  The move has been resisted by the drug makers, wholesalers, drugstores and patients.  Duh.  (That’s last word is from me and not the article.)

Many people looked strangely at me when I said I … END_OF_DOCUMENT_TOKEN_TO_BE_REPLACED

Well, more like sings along while in the last row … END_OF_DOCUMENT_TOKEN_TO_BE_REPLACED