There are two books that come to mind regarding pandemics.  I’m sure there are more but these two resonated with me:  The Hot Zone by Richard Preston (http://www.gradesaver.com/the-hot-zone/study-guide/short-summary/) and The Stand by Stephen King (http://en.wikipedia.org/wiki/The_Stand).  The first is about the finding of the Ebola Reston strain, meaning Reston, VA and the 2nd is fictional and is about a particularly virulent strain of the flu.  Does Ebola scare me?  Of course, but I’m not going to go hide in my basement in full hazmat gear with a year’s supply of freeze dried food.  What does bother me is the CDC has not had its house in order.  The President initially said it was unlikely that Ebola would ever enter the US.  Then Mr. Duncan comes in, then two nurses are infected, and the news media panics.  We’ve all heard the statistics that 70% of 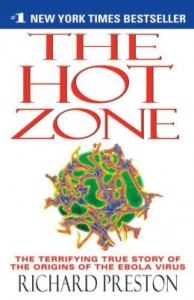 infected Ebola patients die and that by December of this year there will be 10,000 new cases PER month.   The CDC keeps changing what they are using for protocols concerning how high a fever you must have to be contagious.  100 degrees?  100.4  degrees?  104 degrees? The CDC i.e. government told us they could handle this.  I don’t know about you but I sure as hell don’t have a high thresh hold of trust in the government’s capabilities. My hazmat suit is on its way…to keep the insecticide off of me while I spray my orchids for fuzzy scale.

Here is what does scare me: the Enterovirus 68 and Sepsis.  First let’s talk about the Enterovirus.  This year the virus has sickened some 1000 children and is being investigated for at least 6 deaths.  These numbers, according to the CDC, will likely spike because of  a new test they are using to detect the virus.  Although the Enterovirus has been around since 1962, this is the first year it has spread so rapidly and caused so many illnesses.  It primarily infects the young and those with breathing issues.  Why has it sprung up now?  The CDC does not know why it has surged (I’m beginning to wonder about the CDC).  Some viruses seem to surge in multi-year cycles. If this is the case, the impact may have been unusually harsh because there were a large number of children who had never been infected with it before and never acquired an immunity.  They expect that the virus will slow down since it seems to be a “seasonal” virus.  This worries me because I am one of those people with breathing issues i.e. asthma.  I’ve had my flu shot as well as my pneumonia shot.  How about you?

Sepsis…this one should scare the hell out of anyone having the need to go to the hospital or just getting a simple infection.  Every year over 1 million Americans are treated for Sepsis and 28-50% of those people die-far more than the number of U.S. deaths from prostate cancer, breast cancer and AIDS combined.  What is Sepsis and how do you get it?  Sepsis is an overwhelming immune response to an infection.  Immune chemicals released into the blood to combat the infection trigger widespread inflammation, which can lead to blood clots and leaky vessels.   Microbes such as bacteria, fungi and viruses are the most common culprits.  Anyone can get Sepsis but those mostly in danger are those with weakened immune systems, children, infants and the elderly.  People with chronic illnesses, such as diabetes, AIDS, cancer and kidney and liver disease as well as those that have experienced a severe burn or trauma.  There are many ways to treat Sepsis but you can see by the death rate they have yet to find a treatment that suitably targets the aggressive immune responsive system.

Many people looked strangely at me when I said I … END_OF_DOCUMENT_TOKEN_TO_BE_REPLACED

Well, more like sings along while in the last row … END_OF_DOCUMENT_TOKEN_TO_BE_REPLACED