My husband and I were coming home after a visit with his brothers in Jersey.  My husband has an aisle seat and I have the window.  The guy that has the aisle seat across from my husband let’s out this huge, wet sneeze that sprays just about everybody within a 5-6 foot radius.  No amount of Purell is going to keep you from getting that guy’s cold.  Within the week, we were both sick.  Just in…The CDC has admitted that droplets from a sneeze can spread ebola (New York Post 11/01/14).   I saw an article in USA Today about germs on planes.  One would think that the air in a pressurized cabin might be dangerous.  Not according to Michael Zimring, director of travel medicine at Mercy Medical Center in Baltimore.  He says, “The cabin air is fine and aircraft are outfitted with HEPA filters to clean it.”   Air is fine so then let’s look at the inside surfaces.  So you think a plane is wiped down in between flights?  Think again.  They may remove waste but that’s all they clean.  The FAA doesn’t regulate or inspect aircraft cleaning, so frequency and thoroughness are left up to the airlines themselves.  John Gobbels of MedJet Assist says, “That as a rule of thumb, an aircraft is supposed to be completely wiped down after every 30 days of service or at 100 flying-hour intervals.  But in theory, that means that an aircraft can be used for dozens of flights between deep cleanings.”  If you think about it, the interior of an airplane is no different than that of a local theater or restaurant or grocery store.   The germs lurk in the same kind of places.  In a WSJ article on germs in the workplace just one door contaminated with a virus spreads the germ to about half the surfaces and hands of about half the employees in the office within fours hours, according to a study at the University of Arizona.  The hand is quicker than the sneeze.  So, you shake someone’s hand and what are you likely to do?  Touch your face.  That’s right.  On average, an adult will bring their fingers to the nose, mouth or eyes about 16 times an hour whereas a child, ages 2-5, will do this as many as 50 times an hour.  Can you say hello cold/flu etc?  A door nob to a handshake to rubbing the eyes…bingo!  You’ve got yourself a trip to the doctor or pharmacy.  Back to the plane.  What should you be leery of? 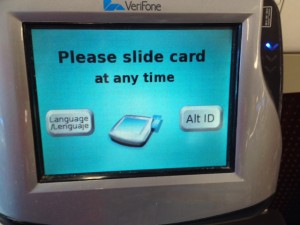 The tray tables had the highest levels of bacteria, and seat belts and armrests were also singled out as places where bacteria survives.  Here is just some general advice unless I’ve turned you into a germaphobe.  These rules can apply to the airplane, the restaurant, the theater, any place.

*Always travel with an alcohol based hand sanitizer.  Use frequently.

*Travel with a small pack of disinfectant wipes.  Wipe down your airplane armrests, tray tables, head rest.  When I was at Kroger the other day and checking out, I asked the manager how often they wipe down the little key pads for using credit/debit cards.  I mean you can just look at it and see the fingerprints all over it.  His response?  “Not enough.”  He handed me the hand sanitizer.  Wipe down those handles on the shopping carts. Wipe down the armrests in a theater.  And with voting coming up, wipe down that touch screen!

*Try to keep your hands away from your eyes, nose and mouth.

*Eliminate the handshake?  Really?  How about a fist bump or elbow bump instead?

*Use your elbow or knuckle to punch elevator buttons or switch on lights.

*Wear a face mask, gloves and special jacket.  Just kidding but some people really do this.  Depends on how much of a germaphobe you now are.

Many people looked strangely at me when I said I … END_OF_DOCUMENT_TOKEN_TO_BE_REPLACED

Well, more like sings along while in the last row … END_OF_DOCUMENT_TOKEN_TO_BE_REPLACED