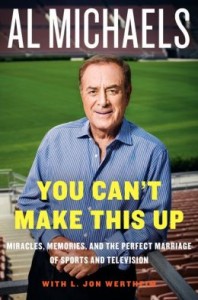 I’ll start with Al Michaels’ You Can’t Make This Stuff Up: Miracles, Memories, and the Perfect Marriage of Sports and Television.  Truth is I only read this book because I needed something different for my contribution to the monthly community newsletter.  I ended up enjoying it.   The good part about the book is that Michaels has been around the block a time or two regarding seminal sporting events.  He has some great, great stories to tell.  He never wanted to be a great athlete.  He wanted to be a sportscaster like the great Curt Gowdy, who told him in 1972, “Kid, you’re gonna have a good career.  Just do me a favor.  Don’t ever get jaded.”  If you were a sports luminary in the ’50s/’60s/’70’s+, chances are you’re mentioned in this book.  Michaels was a friend and tennis partner with OJ so that whole episode is discussed.  He talks about “calling” the Cincinnati Reds’ games and how sad he thinks the whole Pete Rose affair is.  And, of course, he talks about the “miracle on ice” when the US hockey team beat the older and superior Russian team in the 1980 Olympics. He dishes out (or disses, whichever you prefer) stories about people he didn’t/doesn’t like particularly Howard Cosell.  Here’s the weeds part.  Michaels must have kept a very detailed diary or has a video/audio library of all of his broadcasts because he gives details, details, details.  I’m not that big of a sports fan so I skipped through a lot of the pages on baseball. And I don’t really need to know what hotel he stayed at in 1983.   Also, you need to be older to recall some mid-20th century members of the sporting world.  This would make a great gift for the sports fan in your life.

Now on to something  different, John Cleeses’ So, Anyway…  My favorite comedy movies of all time are A Fish Called Wanda and Monty Python and the Holy Grail.  I love watching Fawlty Towers.  I was so looking forward to laughing my rear off or learning more about his time with the other Pythons.  Alas, I was mainly disappointed.  Cleese says this in the book,”Most of you don’t give a tinker’s cuss for me as a human being.  So, anyway…no, you’re just flipping through my heart 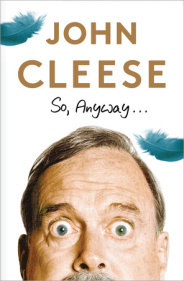 rendering story in the hope of getting a couple of good laughs, aren’t you?”  Well, yes, I suppose.  But I also wanted to know how he became one of the top comedy writers and comedians in the world.  Thing is Cleese is really like Archie in Wanda.  All stiff upper lip and I mean a real stiff upper lip.  He is the quintessential Brit.  Which makes for a mostly boring book.  Now if you’re an up and coming or want to be an up and coming comedian/writer, you might learn something from this book.  There were times I was laughing so hard I was almost crying.  So then what about the weeds part?  As the reviewer for the WSJ put it: “Promising stories are derailed by the decision to narrate them in the voice of Mr. Cleese playing a crashing bore at a party in a Python sketch: ‘My usual sipping companion was a chap who taught history, named Anthony Viney, whose life by his own description abounded with a certain kind of com 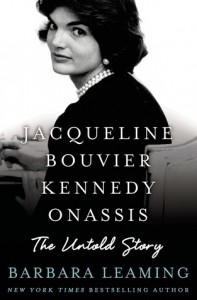 edy.’  “The prose is dead on the page: it has ceased to be: it is ex-prose.”  Ouch.   Cleese spends way too much time on his school days and his teaching career.  He seems far more interested in that than his comedy career.  Oh, and  he’s a liberal.  Smack me in the face with a flounder to wipe the surprised look off of my face.

And now on to something totally different, Barbara Leaming’s Jacqueline Bouvier Kennedy Onassis.  I tried to find on the internet how many books have been written about Jack and Jackie.  I couldn’t come up with a total but I’m sure it’s in the hundreds.  This book takes a different tack than the other biographies.  This book provides suggestive evidence that Jackie suffered from the clinical symptoms of post-traumatic stress disorder including flashbacks, insomnia, numbness, avoidance, fear, depression, and anger.  The unfortunate thing is PTSD wasn’t used as a psychiatric term until the 1980’s.  About 25% of the book is pre-assassination.  I came away from this part of the book feeling as if Jack just married Jackie because he wanted to be a senator and a senator had to have a wife.  He did not want to appear “gay”.  The rest of the book is about PTSD and Jackie and some of the strange choices she made i.e. marrying a much older, wealthier Aristotle Onassis.  Her sister, Lee Radziwell said, “You don’t know what it’s like being with Jackie…She’s really more than half round the bend!…The new horror will bring the old one alive again and I’m going to go through hell trying to calm her.  She gets so that she hits me across the face, and apropos of nothing.”  She’s referring to the death of Bobby Kennedy.  I did learn that Jackie was not wealthy when she married Jack.  It was her stepfather that had all of the money.  Jack was a tightwad.  He left Jackie $250,000 and interest on one trust.  Most of her clothes were knockoffs.  That Bobby Kennedy and Lyndon Johnson both tried to use her for political expediency.  She also did two sets of audios, one to Arthur Schlesinger regarding Jack and his presidency.  Those were published in 2011.  The other set was to a biographer, William Manchester, where she discusses that terrifying day in Dallas.  Those won’t be published until 2061.  In the weeds?  Well, after a while you just say, OK, I get the point.  Jackie’s life has been so dissected that once Ms. Leaming made her point, there really wasn’t that much new to read.  I’d say you reach that point after having read about 80% of the book.

Many people looked strangely at me when I said I … END_OF_DOCUMENT_TOKEN_TO_BE_REPLACED

Well, more like sings along while in the last row … END_OF_DOCUMENT_TOKEN_TO_BE_REPLACED