My sister and I have decided that life is getting too short.  There are too many things we still have left to see and do.  I do have some friends, as they’ve gotten older and no 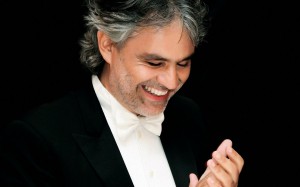 w have grand kids, have decided home is where the heart is.  Our hearts are at home also but we just want to add to that joy other things that God has put on this earth.  Like that great singer Andrea Bocelli.  I’ve decided that on a regular basis I’m going to troll the arenas and venues as well as performer web sites to see who’s performing throughout the year either in Houston, where my sister lives, or here in Atlanta, where I reside.  I’ve always enjoyed going to concerts.  My first concert was at Palmer Auditorium in Austin, Texas.  I was a student at  the University of Texas and we had the opportunity to purchase a season’s pass for $20.  It was 1970.  Austin was not on any big groups radar because the auditorium really was a dump.  The big acts went to Houston and Dallas.  My first band? They were the former back up band for Bob Dylan…The Band,  who later arguably made the greatest rock concert video in history, The Last Waltz.  But I’m digressing.  You’re reading this to find out about my concert experience with Andrea Bocelli.  Let’s not squander any superlatives here.  The man is gorgeous and on top of that he’s Italian and can croon a love song until you’re weak in the knees.  But why only “partially” drools and no total drools like I did over Bruno Mars or Sting?  I should have read reviews of his concerts before I went.  Because I was unprepared for 1/2 of his show being OpERAHHHHHHH!  Yes, I know he is an opera singer.  Duh.  But he has made the majority of his money singing main stream opera (for non opera followers) and doing duets with pop stars.  I read a review by a NYT’s critic and he pretty much skewered Bocelli for his operatic voice.  Of course Bocelli responds that the opera world is elitist.  I’d have to agree on that one.  I couldn’t find a song list for Houston, but I did find one for Nov. 18:

During the show, Bocelli would sing one song by himself or maybe two and then would bring on a soprano or classical violinist.  He would then be escorted to stage left and the aforementioned soprano or violinist would do a solo.  Then this would be repeated.  I’d say for about 45 minutes.  A 15-20 minute intermission then commenced.  When he came back, he was now prepared to go mainstream.  Please do not too harshly condemn me for what I’m about to say.   His rendition of Elvis’ Love Me Tender reminded me, okay here goes, of Ricky Ricardo.  There I’ve said it!  Yes, it is such a sweet love song and if my husband had been with me, I would have kissed him.  Can’t help Falling in Love was a little better. For every song, particularly the opera numbers, there are videos either naming the song or showing some beautiful place in Italy.  For New York, New York, it was a video of New York and his trips there.  He also had a wonderful pop singer accompany him on a number of his main stream songs i.e. Amazing Grace.   I will say this.  The man knows how to do encores.  He had 5, ending the night with Nessun Dorma, which just happens to be a favorite of mine.  Did I enjoy myself?  Yes indeedy.  I just wish I knew more about opera.  No, not really…

Many people looked strangely at me when I said I … END_OF_DOCUMENT_TOKEN_TO_BE_REPLACED

Well, more like sings along while in the last row … END_OF_DOCUMENT_TOKEN_TO_BE_REPLACED