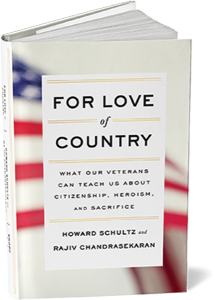 The new Clint Eastwood movie,  American Sniper, has recently been released.  It’s about the Navy SEAL, Chris Kyle, and his time as a military sniper and his life after.  While trying to help a fellow vet, who had PTSD, the other vet shot and killed Chris.  Chris’ wife, Taya, and the film’s star, Bradley Cooper, are making the rounds.  Cooper brings up something that few Americans know.  It is a fact that less than 1% of our population has ever served in the military since 9/11.  Add to that their direct family members and that means that about 5% of the population has any direct contact with our military.  January is my military month.  I just finished 2 great non fiction books about our veterans and I guess I’ll finish with the American Sniper movie.  The two authors have nothing in common except for being in the media spotlight.  But, yet, they both see things the same way.  The first author is a Left Coast liberal.  A huge Obama supporter and Democrat.  He also runs one of the most popular businesses in the world, Starbucks.  I’m talking about the CEO, Howard Schultz.  Schultz’ book is For Love of Country: What Our Veterans Can Teach Us About Citizenship, Heroism, and Sacrifice.  Mr. Schultz began his education regarding the military by being asked to speak at West Point.  His visit he says, “revealed to me just how disconnected I had been from these fellow citizens who have dedicated years of their lives to defending the freedom I hold dear.”  After the visit, he says, “I had resolved to myself that I couldn’t be a bystander when it came to our veterans; I couldn’t simply say ‘thank you’ and move on.”  This is what he has done.  He has become proactive in helping our vets.  Starbucks now has an “Armed Forces Network” made up of a group of their employees who have served in the military.  Bob Gates, the former Secretary of Defense, is now on the Starbucks’ board of directors.  Starbucks has committed to hire ten thousand veterans and active military spouses between Nov. of 2013 and Nov. of 2018.  He is beyond shaking a vet’s hand and saying “thank you for your service”.  With his new book, he shows us how and why we should go beyond this.  The book is divided into 3 parts.  The first part is five gripping stories about soldiers who have committed battlefield heroism.  The second part is about the home front and how useful our returning veterans can be…if we give them the opportunity.  The last part is all about us and what we can do.  He highlights the qualities that our veterans have that companies long to find in employees.  So, as he says, we, the 95% of Americans that don’t have “skin in the game”, need to involve ourselves so that we can really thank these vets with actions and not just words.

The second book is from that very Republican Arizona Senator and war hero, John McCain.  It’s Thirteen Soldiers: A Personal History of Americans at War.  Here the Senator puts the spotlight on 13 soldiers from the Revolutionary War to present day Afghanistan.  It’s slow going profiling the first 5-6 soldiers.  There were no Ernie Pyles, no Twitter feeds, no FB postings nor any cell phones.  So, all McCain has to rely on is briefly written diaries or newspaper accounts of their exploits.  I had forgotten how many wars/conflicts the United States has been in.  Some I had not totally forgotten: the war with Mexico, Cuba but I had no idea that we were once a colonial power after fighting the Spanish for…the Philippines.  These wars would never pass muster today because of the atrocities that went on and we’re talking going beyond water boarding.  One general gave a captain the order to kill anyone over the age of ten.  Luckily, he didn’t listen to those orders.  Some were scoundrels, some were just vain glory and some were the best of the best.  One of the best stories for me was the one about vain glorious Louis Gabaldon, who fought in the battle of Saipan.  He was a hoot.  But also very much a hero.  He single handedly talked 1000’s of Japanese soldiers in to surrendering.  He spoke broken Japanese.  He would go out alone and approach the myriad of caves in the mountains on the island and,  literally, talk the Japanese into believing they were surrounded by American Marines, convince them to take off their clothes, put their skivvies on their bayonets and march them to his Marine camp.  Unbelievable.  McCain discusses the deployment of women into the front lines, women as medics, black sailors during the American Revolution and their sacrifice during the war with the Spanish in Cuba…all heroically.  McCain says that he wis 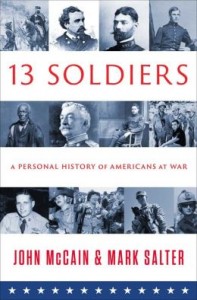 hes to convey the following attributes as regards to war: the feelings of fear, duty, honor, comradeship and sacrifice.  He is, as you might expect, particularly familiar with pilots in Vietnam and the prisoners of war.  He simply says that our soldiers are “ordinary people doing extraordinary things.”  McCain is a little too much in the weeds for me on military tactics.  But the heart of the book is our men and women who have fought for love of country or vain glory, to escape poverty, to not understanding as to “why the hell are we here”, but leads to the faith “which leads a soldier to throw away his/her life in obedience to a blindly accepted duty, in a cause which he/she little understands.” 95% of the US population has no clue as to their real sacrifice…As Chris Kyle so famously said, I got really angry with the guy fuming because the foam on his latte was not to his liking while he knew nothing about what I was doing to keep him safe.  He then changed his mind and said, I’m doing this so he has the freedom to fume about his foam…(not exactly his words but close.)

Many people looked strangely at me when I said I … END_OF_DOCUMENT_TOKEN_TO_BE_REPLACED

Well, more like sings along while in the last row … END_OF_DOCUMENT_TOKEN_TO_BE_REPLACED