Erik Larson, the man behind Devil in the White City and In the Garden of the Beasts, has a new book out, Dead Wake.  Here’s my take.  It’s not that I didn’t like the book but, for me,  it is too dense with details about German U boats as well as the British Admiralty during WWI. Now if this is your kind of book then run and get it. I finished it because I wanted to know what really happened with the sinking of the Lusitania by a German U boat. I did get that answer. If you don’t remember the history of the Lusitania, it was a Liverpool bound British passenger ship that set sail from New York and on May 7, 1915 was torpedoed off of the coast of Ireland by a German U boat.  1,198 men, women and children died, among them 123 Americans.  Just the kind of disaster that could pull the very reluctant, isolationist America to join the British and the French in fighting Germany.  I learned everything from the fact that the German U boat captains had total control over the decision to torpedo whether civilian or merchant ships to 60% of all torpedo launches were duds.  That the British had cracked the German naval code and knew where most of the U boats were. That Cunard, in order to save money, had ordered the captain of the Lusitania to slow down which gave the slower U boats a distinct advantage. That the Germans had printed a warning in the New York papers that they were gunning for the ship. That nothing had been done about safety since the sinking of the Titanic except design new life boats and life jackets. But because most of the able seaman were fighting in the war, untrained workers were hired and knew nothing about lowering lifeboats or using life jackets. There were still no  lifeboat drills.  As a matter of fact, even though the ship had the newer life jackets, the passengers were not shown how to put them on.  Instead of having the inflated part in the front, the people put them on backwards which forced them to be face down in the water.  Many drowned because of this.  As far as the lifeboats were concerned, as the ship began to list, the lifeboats on one side were unusable and on the other side they dangled 60 feet above the water.   To give us a personal touch, Larson provides numerous biographical info on the passengers.  We have billionaires, famous architects and families of 7, singles, others engaged, pregnant women.  I felt like we, as readers, could have been given a passenger’s name, like they do at the US Holocaust museum or the Titantic exhibit and at the end 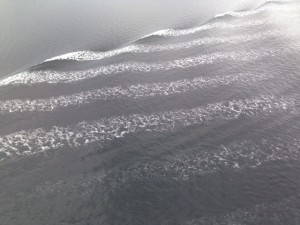 find out if they had lived or died.  We also enter the world of the two captains, Captain Turner of Cunard and Captain Schwieger of the German Navy.  One is forever haunted by the disaster while the other tries to save a career.   A good companion piece would be the movie Das Boot about WWI U boats. I’m writing this as I’m on Holland America’s Zaandam. We did have a lifeboat drill and new life jackets.

Many people looked strangely at me when I said I … END_OF_DOCUMENT_TOKEN_TO_BE_REPLACED

Well, more like sings along while in the last row … END_OF_DOCUMENT_TOKEN_TO_BE_REPLACED