By now my husband has a cold and I’m starting a sinus infection.  Reason?  The pollution.  We, here in the good old US of A, are so sanitized and 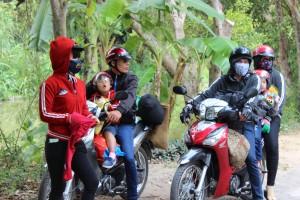 deodorized, emissions guarded like gold that our systems can’t take this stuff.  No wonder everyone in SE Asia is walking around with a mask on.  And that’s the medication I forgot to bring…decongestants.  I did have the Z Pack and being the good wife that I am, I let my husband take it.  Once we reached Phnom Penh, I got the address of a reputable pharmacy, hopped on a tuk tuk, whisked to the pharmacy and asked for a decongestant.  I have no idea what was in the thing but it worked.  Blood pressure be damned.  It’s about a 5-5:30 hour drive from Siem Reap to Phnom Penh.  The bus did have wi-fi:)) We had a couple of potty stops.  I love the different types of restrooms you find around the world.  Behind a termite hill in Tanzania is better than the toilets I’ve used at the Grand Bazaar in Istanbul.  One stop had an outdoor market.  Here they sold roadside “snacks”.  The Cambodian form of popcorn.  What were they?  Deep fried tarantula, deep fried grubs, deep fried grasshoppers and deep fried water bugs i.e. roaches.  No one on our bus decided to try these “snacks”.  While on our bus, our guide spent a great deal of time talking about the genocide of the Khmer Rouge.  I’m sure many of you don’t know about or don’t remember the “killing fields” of Cambodia.  Pol Pot, a communist, along with the help of the Vietnamese communists tried to turn Cambodia into a sort of 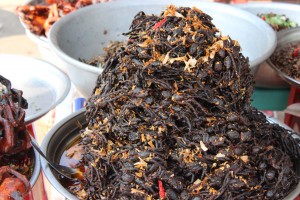 experiment.  They tried to take Cambodia back to the middle ages and make it an agrarian state.  From 1975-1979 they killed two million of their own people.  Primarily those with higher educations and skilled jobs.  They died by execution, starvation, disease and overwork.  The Prime Minister at the time, Sihanouk, realized that in order to stay PM, he would have to form a coalition with the Khmer Rouge.  He ended up participating in the genocide.  Our guide told us the story about his 15 year old mother.  She was from an influential family.  She was held in a detention camp.  One day she is separated out, drug to a field, told to kneel in a shallow grave and prepare to die.  She was going to get her head bashed in by a 12 year old girl.  Luckily for her, a guard knew her and saved her life.  We visited S-21, a school transformed into a prison and torture chamber.  It’s not a big place but as many as 17,000 were held here during that four year time span.  In the scope of atrocities, the genocide committed on the Cambodian people is small compared to the holocaust.  But any amount of atrocity needs to be chronicled so that we remember and our children learn from it.  Unlike the aftermath of WWII where the world sought to capture and put on trial every Nazi involved in the holocaust,  the Cambodian government gave all the Khmer Rouge soldiers amnesty.  Except for four top leaders excluding Pol Pot.  So these soldiers today live among the people they terrorized.  It has to do with a Buddhist tenant, which I clearly do not understand. 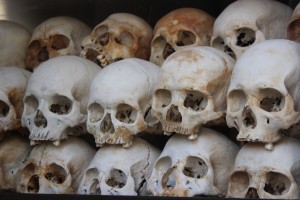 A couple of observations… Cambodians buy many, many, many used cars from America.   When we were in Phnom Penh we saw so many Lexus SUVs as well as Land Rovers and Dodge Ram pick up trunks.  I asked a local Lexus dealer (here in the states) about this and he says it’s a huge business.  Another thing, unlike Americans who will do almost anything to get a tan,  Cambodians will cover up from head to toe, long sleeves to gloves.  It has nothing to do with skin cancer.  As our guide explained, they like their skins light colored.  Next up:  Good Morning Vietnam!

Many people looked strangely at me when I said I … END_OF_DOCUMENT_TOKEN_TO_BE_REPLACED

Well, more like sings along while in the last row … END_OF_DOCUMENT_TOKEN_TO_BE_REPLACED