What an iconic movie. 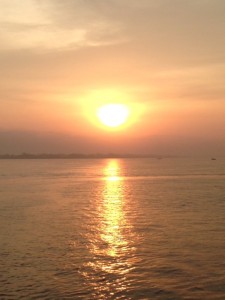 I couldn’t wait to say that as soon as the sun came up over the Mekong.  When we got back a friend of mine, who is in her 50’s, asked about the trip.  I asked her how much she knew about ‘Nam and she said “not a whole lot.”  That’s probably the case with many folks.  Considering what they teach today as history in our schools…For the uninitiated, a bit of history.  The French had colonized Vietnam so called Indo China. When the communists from northern Vietnam tried to take over the country, the French asked JFK for help.  He sends troops and then here comes Lyndon Johnson and Robert McNamara.  They believed in the domino theory.  We were in the throes of the cold war with the Chinese and Russians.  Everyone was scared that communism would take over the world.  So, if one domino fell i.e. Vietnam then before you know it, Australia could be communist.  At the height of the war, 1969, we had over 500,000 troops in Vietnam.  During the war, approximately 58,000 troops were killed.  Keep in mind that the majority of the men who fought in this conflict were drafted.  If you had a low number, you were toast.  After visiting Vietnam, I can see just how difficult it was for our troops to fight in such an environment.  Basically the country was divided in two with the Viet Cong controlling the north and Hanoi with the US backed troops controlling the south around Saigon.  Even though the country is now 100% communist, the south is still more westernized than the north and seems to be more educated and wealthier (http://thediplomat.com/2014/10/vietnams-tale-of-two-cities/).  The more we learn about the war or as the Vietnamese call it, the war of American aggression, the more we learn how horribly the war was run 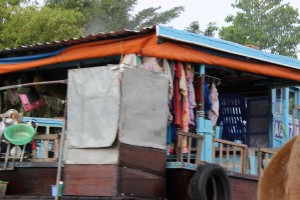 and how badly our leaders misused our troops.  Having said that, I know people that served there and some who lost their lives there.  So, for some of the places we visited, it was tough to take.  Even though some on our trip started in Hanoi, due to the length of the trip, we opted for the Siem Reap/Saigon trip.  We entered the Mekong on Tonle Sap Lake.  Our first stop in Vietnam was an island, Evergreen Island, where we took a leisurely walking tour of the village.  Most of the houses are o 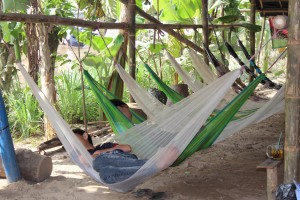 n stilts.  Two reasons, really…One to hang hammocks to sleep in to help with the heat and secondly, because of the rising waters during rainy season.  Few of the homes have electricity or running water and no indoor toilets.  Very little cell service.  We were invited into one of the houses which was festively decorated for Tet.  We were offered boiled water but I didn’t want to take the chance.  Everywhere we went we were greeted pleasantly.  There wasn’t anyplace we went where someone had their hand out for a tip.  They asked us to please not give the children any money so as to discourage panhandling.  Floating down the Mekong reminded me a great deal of floating down the Nile. While floating down the Nile, you could be in Cleopatra’s time.  Here, it’s like floating 100 years ago except with some outboard motors.  People live by the gifts of the Mekong.  They fish in it; they drink its water; they wash their clothes in it; they irrigate their fields with its water and…they defecate and urinate in it.  All along the river you find houseboats tethered with many gaily decorated…with many ramshackle.  Vast rice fields waiting for the next rainy season. 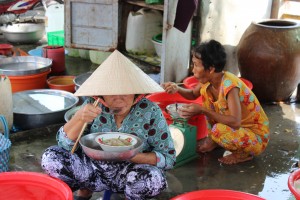 I always enjoy going to local markets.  The central market in Phnom Penh was a disappointment.  It was mostly for the local people to shop.  With Ama we made one stop at Sadec to visit the local market.  Now we’re talking.  Slithering eels, chickens waiting to have their necks wrung, live fish waiting to be gutted.  My PETA and vegan friends are now barfing or bringing a lawsuit:)  Women cooking food over open burners or making delicious bowls of noodle soups.  The sights and the smells of a true farm/fish to market.  And, of course, the iconic woven funnel shaped hat.  Next up: Saigon and the American war of aggression.

Many people looked strangely at me when I said I … END_OF_DOCUMENT_TOKEN_TO_BE_REPLACED

Well, more like sings along while in the last row … END_OF_DOCUMENT_TOKEN_TO_BE_REPLACED