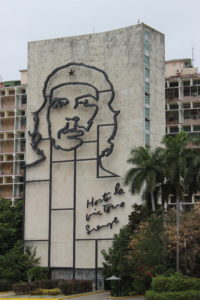 There are a couple of things you learn right from the get go when you visit Havana.  The first is…yes indeed, those old cars are there and in perfect running condition.  Although they now have Chinese or Russian parts in them.  The second is that Havana is a tale of two cities…the renewed accomplished by the Historical Ministry and then the old, crumbly, falling down parts, which is really the majority of the city.  We were there right after Obama so the streets were immaculate.  I’ve been to Russia, Cambodia, Vietnam, Argentina, Venezuela.  All communist or socialist.  Cuba stands hands above those in its zeal for communism.  Not so rabidly zealous as North Korea, though.  For example, the only things you can own are a house (but the government owns the land) or any personal items like a car, horse, wagon, ox etc.  The rest is owned by the government.  This was a People to People trip and Yalla gave us a long list of things to bring to give to the Cubans.  The list included personal hygiene items, school supplies, over the counter medical supplies, used clothing and outdated technology equipment.  Several of us discussed this and the moral quandary we felt.  On the one hand we wanted to help the people but on the other hand their government put them in this situation.  I just read yesterday that Fidel’s personal wealth is $900 MILLION.  And his poor people barely have a pot to piss in.  Was it worth the trip?  Yes but it grips you in the gut when you think of what these people go through.  Anyway, one of the things you can do as a Cuban citizen is own your own Paladar.  Not a restaurant, no, no.  A restaurant is in an office building and owned by the government.  When the food runs out…it’s out.  A Paladar is an eating establishment in someone’s home.  These are very picturesque.  Most have indoor and outdoor 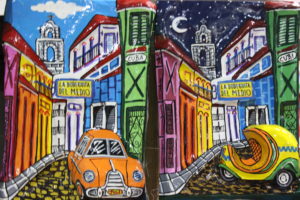 eating areas.  And, when in Havana, the food was very good.  Out in the countryside, the food was awful. But back to Havana.  One night we ate at La California.  I’ve never had a better seafood stew and we were served two huge lobster tails.  All the while the TV was set to MTV and Justin Beiber twerking with half naked women.  The Cubans love their MTV.  Another paladar we enjoyed was the Rejoneo.  They have tapas style food but the main courses are cooked on hot lava stones…shrimp, lobster, chicken, beef.  It was delicious and fun.  I should say at this point that there are two currencies in Cuba, one for the locals and one for the tourists.  The tourists, particularly the Americans, get screwed.  Cuba’s currency is the CUC (kooks) and for one tourist CUC,  the dollar’s value is .87.  All prices in Cuba are regulated unless you want to buy something from a street guy going, pssst, lady, want to exchange money, buy cigars?

Be prepared to walk and walk and walk.   Havana is a city of plazas and narrow alleys and cobblestones.  The colors of the city are vibrant.  The people exceedingly friendly.  The music outstanding.  There are many, many street performers that have to get a license from the government to perform.  And they do expect a tip to take a picture.  One CUC was what we usually gave.  Of course there are the myriad symbols to the Revolucion.  There’s Revolucion Square,  the iconic  picture of Che, the Plaza de Armas, El Capitolio Nacional etc.  And then there’s the homage to rum and cigars.  We went to the Havana Club Museum of Rum where you can, of course, buy 20 year old rum for $125.  We also went to the Conde Villanueva Cigar Lounge to see how cigars are rolled.  Of course, they are for purchase.  Keep in mind Americans can only bring back $400 US TOTAL in goods…only $100 TOTAL in cigars and rum.  I bought a 7 year old rum for 16 CUC’s and 4 cigars, Cohiba’s, at 20 CUC’s each.  Other than arts and crafts or perhaps some Cuban made jewelry you might buy at the hotel, there is not much to buy. 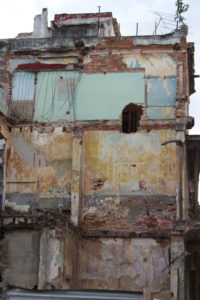 If you go on a People to People trip, you are requested to visit old folks’ homes, bringing donations of course, orphanages, Jewish synagogues and listen to a Cuban diplomat drone on and on about how Cuba’s ills are all the fault of the US.   Hmm, what about the rest of the world helping out as well as your changing policies? Next up:  The love of Hemingway and the art world

Many people looked strangely at me when I said I … END_OF_DOCUMENT_TOKEN_TO_BE_REPLACED

Well, more like sings along while in the last row … END_OF_DOCUMENT_TOKEN_TO_BE_REPLACED