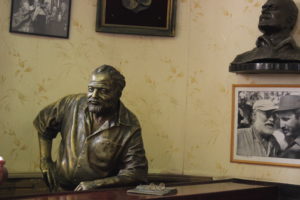 Ernest Hemingway is an icon in Cuba.  We went to just about every haunt he ever haunted in Cuba.  Our first stop was El Floridita Bar, birth place of the daiquiri and one Hemingway’s favorite bars.  The bar area itself is small.  There is a bronze statue of Hemingway leaning against the bar.   Of course there are many pictures of Papa adorning the walls.  When we were there, they had a quartet rocking the place. We also visited the Hotel Ambos Mundos where Hemingway lived from 1932 until 1939.  It’s a beautiful old hotel with a great bar.  Of course, the obligatory pics of Papa are on the walls.  On our way out of Havana and on our way to Trinidad, we stopped at Cojimar, a sleepy fishing village which may have inspired Hemingway’s novel, The Old Man and The Sea (for which he won the Nobel Prize for Literature).  There is a bronze bust of Hemingway on a pedestal facing the sea.   We ended our pilgrimage at his home, Finca Vigia, where he lived for two decades.  If you look for non religious icons in Cuba you find Fidel, Che and Hemingway.  Why Hemingway?  When he won the Nobel Prize, he gave it to the Cuban people.  He also called himself Cubano Sato or everyday garden variety Cuban.  After he died, his wife bequeathed Finca Vigia to the Cuban people.  We had arrived a week after Michelle Obama and her daughters had visited so the place was immaculate.  The downside of visiting here?  You can’t go in the house.  All you can be is a voyeur, looking through the windows.  Our guide, a sweet 27 year girl, had learned her Communist view of Hemingway well.  What a wonderful man.  Didn’t he do great things for the Cuban people?  Well, I told her.  Here’s the other side of the story.  Having taught Hemingway to Advanced Placement Juniors in high school, I have a different version of Hemingway.  He was a misogynist, an alcoholic, bi-polar, and in later life, a mean son  of a bitch (http://time.com/3638572/hemingway-in-cuba-1952-portrait-of-a-legend-in-decline/).  I told h 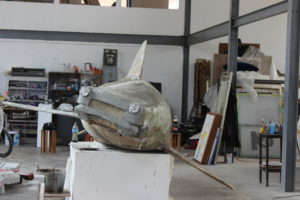 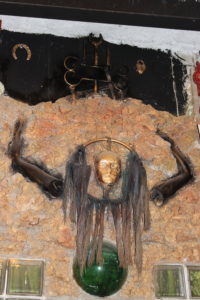 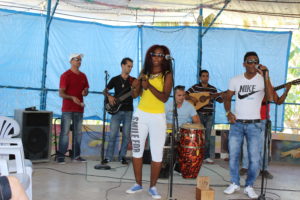 Havana is a haven for artists.  While walking the streets of Old Havana, we saw beautifully painted murals.  We saw very little graffiti.  One of our stops was a former laundromat that has been turned into an artist studio.  Cubans do love their abstract art.  The place is now called La Lavanderia.  I’m not into sharks with car fenders on them, but, hey, that’s just not my thing. We had a fun visit to the Callejon de Hammel (Hammel’s Ally) to see Afro-Cuban art and see an authentic Afro-Cuban dance. I’ve never seen so many bathtubs turned into art.   And, finally we went to a street that has been totally transformed by a community art project.  They have workshops here for all forms of art, ceramics, theater, dance and music.  Here I met the Cuban Usher!  He was so cute and could the guy dance.  I hope you enjoy the photos.  Next up: Cuba and Communism

Many people looked strangely at me when I said I … END_OF_DOCUMENT_TOKEN_TO_BE_REPLACED

Well, more like sings along while in the last row … END_OF_DOCUMENT_TOKEN_TO_BE_REPLACED