I was trolling the internet late one night for possible concerts that my sister and I might like to attend.  I checked for the local arena and low and behold the rapper, Armando Christian Perez, better known as Pitbull, would be performing in July.  Since my sister and I had just returned from Cuba, I thought what a great way to extend our Cuban experience.  At the same time, I decided I was going to get my first and probably only, well, maybe only, tattoo.  So I called my sister and YES!  We’re going to see Pitbull and we’re both getting tattoos!  I didn’t buy expensively crazy tickets, $150 each, which put us 6 steps up from the floor, in the middle.  When we go to this arena in Atlanta, my sister and I like to stay at the Omni Hotel because it is connected to the arena by the CNN center.  It’s a five minute walk from the hotel to the arena.  My husband at this point is saying, quote, “I don’t know you anymore.  You’re going to see that Pitdog guy AND getting a tattoo and at your age!”  Well, excuuuuuuse me.  I didn’t realize that 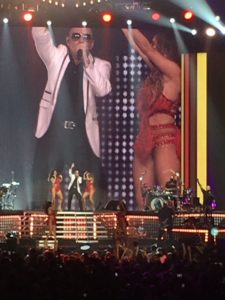 being a woman of a certain age puts limits on things…well, maybe some things…like trying to read without readers.  After my sister and I went to see Bruno Mars, we knew we would not be the oldest persons at the concert.  And we were not.  But, we were dummkophs (so, we’re of German heritage and not Latino) and actually showed up at 7pm when the pre-show was supposed to start.  First came on some Latino rapper and then a really, really cute young Puerto Rican singer named Prince Royce.  What a doll.  I had looked him up before we went and he has a great music video with JLO and Pitbull entitled “Back it Up”.  He brought a swooning young lady up on stage to sing a love song to her and we thought she’d faint.  Then one of those DJ’s came on that mixes up songs.  See, I am a woman of a certain age and I don’t have a clue about what he’s called.  By now it’s 9:30 and the stage has been set and out comes Mr. Worldwide.  Well, not quite.  The first 5 minutes of the show begins with a documentary about Armando and it is either a way to rehabilitate his past or to show immigrants they have a path to success.  The video showcases the nationwide school program he has started as well as receiving the keys to the city of Miami.  I’m not going to go into his history.  But let’s just say HE needed to say whatever he was saying.  THEN came an hour and forty five minutes of pure, unadulterated fun.  The guy never stopped dancing and singing UNLESS he was postulating (yes, using a big word) postulating on the current state of our presidential campaign.  As he so eloquently stated, “they’re all fucking assholes.”  His premise, and I can’t say I blame him, is based on immigration.  Even though he was born in the US, his parents are Cuban immigrants.  One thing I was definitely curious about, since PB does so many collaborations i.e. Keisha, Chris Brown, JLO etc, was how would he handle this i.e. the songs.  He uses  videos and then he sings live.  It worked out very well.  Lots of big screen shots and pyrotechnics.  There is one video that is mainly jiggling asses.  The guy has got to be the “ass man” as Kramer from Seinfeld would say.  Lots and lots and lots of twerking.  The audience was probably 75% Latino and the rest was of the white bread persuasion.  I sure moved body parts I haven’t moved in awhile. After each song PB stands up there and just has this shit eating grin on his face like “I’m great are what?”  The next day we met a couple in the elevator and asked them whether they had seen PB.  Yes, we profiled.  They were Latino and yes, they had.  They paid $750 per person to be in the 5th row.  That’s a hefty price.  As far as the tattoos…Well, that’s another blog.  Oh, 75% of PB’s songs were in English and the rest in Spanish.  No matter.  Your hips don’t lie when it’s that kind of magic:))

Many people looked strangely at me when I said I … END_OF_DOCUMENT_TOKEN_TO_BE_REPLACED

Well, more like sings along while in the last row … END_OF_DOCUMENT_TOKEN_TO_BE_REPLACED