The Hamilton Affair by Elizabeth Cobbs

The Perfect Horse by Elizabeth Letts

It seems that historical fiction is on a roll.  Many times biographies are too droll.  So, authors are using facts about famous people and then creating a more complex picture of that person.  In other words, creating a fictionalized account of a nonfiction life.  They walk a very tight rope.  Elizabeth Cobbs has done an excellent job of creating a world around Alexander Hamilton in The Hamilton Affair.  Hamilton is pretty popular in the 21st century.  The Broadway play, Hamilton, is a huge success with a sound track and a table top book.  Ron Chernow has a successful bio, Hamilton.  To describe The Hamilton Affair the Miami Herald titled its review of the book with, “Inside America’s First Sex Scandal with Alexander Hamilton.”  It’s a very enjoyable book.  Ms. Cobbs is a professor of history at Texas A&M.  You may think that as a professor of history the novel would be dry.  But it is definitely not that.  She structures the novel as vignettes based on Hamilton and his devoted wife, Elizabeth Schuyler, following them from their youth to their deaths.  We should remember from our history lessons that Hamilton was killed in a duel by Aaron Burr.  Schuyler died at the age of 97.

Hamilton’s story begins in St. Croix where he supports his mother.  He is, to use a current phrase, a boy from the wrong side of the tracks.  But, as we learn from the novel, he is a smart kid and is sent to America by supporters to study and, hopefully, succeed in life.  Elizabeth is from Saratoga, NY and comes from a good family.  When Hamilton and Elizabeth meet, she is a 22 year old spinster.  She is staid while he is dashing.  But fall in love they did.  And then in steps Mrs. Maria Reynolds with whom Hamilton carries on a torrid affair.  So, we’ve got love, deception, the revolutionary 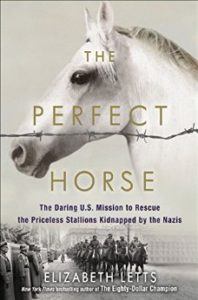 war, the beginnings of a new nation and one, big juicy scandal.

I found The Perfect Horse: The Daring US Mission to Rescue the Priceless Stallions Kidnapped by the Nazis(nonfiction) by Elizabeth Letts to be fascinating.  As Hitler’s troops conquered country after country, his soldiers were to go to stud farms and riding schools to find the best studs and broodmares to bring back to Germany.  Hitler’s aim was to create the “perfect” horse just as he tried to “perfect” the German people.  As Letts writes, “It was a quirk of Nazi philosophy, so inhumane to humans, that animals were treated with the utmost care and kindness.”  While the troops were massacring and enslaving millions, they took very good care of prized and well bred horses.  One of the most important breeding farms set up by the Nazi’s was deep within the borders of Czechoslovakia.  The story begins as the Nazi’s are becoming aware that they are losing the war.  Hitler had put Gustav Rau, a German horse expert, in charge of the breeding project.  As the Russians are approaching Czechoslovakia, Rau was in fear that his horses would be taken by the Russians and either put into battle or eaten.  He appoints veterinarian, Rudolf Lessing, and a small group of Nazi officers to approach an American encampment in Bavaria and try to persuade them to secure the horses and place them under American protection.  Have you EVER heard of this story?  Well, neither had I.  It is as good a read as any thriller on the market.  It is absolutely an amazing story.  The beginning may throw you off because it’s about the U.S. Cavalry and horse breeding.  But stick with it.  It’s worth the wait.

Many people looked strangely at me when I said I … END_OF_DOCUMENT_TOKEN_TO_BE_REPLACED

Well, more like sings along while in the last row … END_OF_DOCUMENT_TOKEN_TO_BE_REPLACED